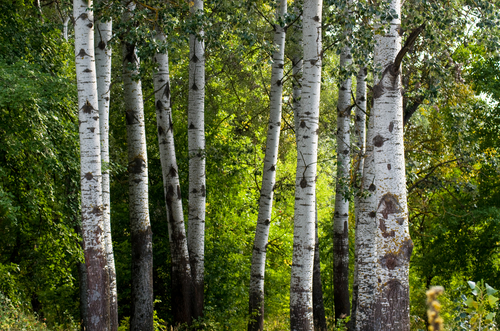 As the world’s fastest growing temperate tree species, poplar can add a dozen feet annually and reach maturity in as few as four years.  One of its hybrids, populus x generosa, has the widest land suitability footprint of any bio-energy crop, including willow and switchgrass.  But the poplar species’ malleable, rich genetics also make it ideal for maximizing its potential as a source of fuel-quality cellulosic ethanol.

Related to the cottonwood and Aspen, this white, light wood has traditionally been used for pulp, paper, and plywood veneer.  In North America, it’s the leading source of chopsticks and wooden matches.  But a growing number of researchers think poplar is missing its calling as a bioenergy feedstock.

“We would like to use [hybrid] Poplar bio-ethanol as a drop-in aviation fuel in the Northwest,” said Rick Gustafson, a University of Washington chemical engineer and project director of Advanced Hardwood Biofuels Northwest, a consortium of university and industry partners.

Gustafson says it grows well on marginal land that’s not productive enough for agriculture.  He notes it’s not quite as easy to break down Poplar’s cellulosic sugars as agricultural residues.

“The idea is that you harvest it when you need it,” said Gustafson.  “A harvester chips it onto a truck; then you take it back to the factory and dump it into the feedstock system.”

After harvest, the stand can be regenerated by vigorous re-sprouting or coppicing of the severed root stumps, says Brian Stanton, GreenWood’s plant breeder and the chief science officer at GreenWood Resources, a Portland, Oregon-based natural resource management company.

“The risk of managing a crop on a rotation of three years is much less than when you grow it for twelve or fifteen years,” said Stanton.  “A density of 1500 stems per acre can grow for three years and then we cut it and send that material to the refinery.”

Although no one is making biofuel from Poplar yet, said Gustafson, the hope is that next year in Boardman, Oregon cellulosic ethanol developer ZeaChem will start production of make poplar-based bio-ethanol. ZeaChem’s planned operation calls for a commercial demonstration plant geared at 250,000 gallons of bio-ethanol per year, producing both acetic acid and bio-ethanol.  He says the acetic acid would be a bio-reagent byproduct.

“We know how to make this stuff no problem, it’s just a matter of economics,” said Gustafson.

The current low prices of natural gas and oil, in general, is hampering the economics of making bio-ethanol from Poplar, said Gerald Tuskan, a plant geneticist and a corporate research fellow at the Oak Ridge National Laboratory.

“Crude is now around $65 a barrel and would have to go back to $100 a barrel to make it economically sustainable,” said Tuskan.  “Startups are having a hard time getting venture capital and resources to build new facilities.”

But if carbon emissions were taxed in the U.S., then these cellulosic ethanols look much better than corn-based ethanol, said Gustafson.

Tuskan and his colleagues are working to make it more cost effective so instead of a $100 threshold per barrel of oil, Poplar-based ethanol can become competitive at $65 a barrel.

“For a 25 million gallon refinery, about a third of the cost is the production and delivery of the feedstock,” said Stanton.  “But the other costs are the enzymes, fermentation nutrients, raw materials, natural gas, and fixed costs for electricity.”

But Stanton says by increasing yields and lowering harvest costs would help lower the price threshold at which Poplar bio-ethanol would be able to compete.  However, he notes that for Poplar-based ethanol to be competitive with oil — even at the elevated rate of $75 a barrel — producers would have to deliver their bone dry chipped Poplar at $60 to $80 a ton.

“Our total production costs would have to be no more than $65 per bone dry ton,” said Stanton.  “That is chipped into the storage bins for delivery to the refinery.”

Stanton says ideally they would buy land and also contract with landowners to grow Poplar here in the U.S.  “We are looking for varieties that root readily, grow fast and are disease resistant,” said Stanton.

One key is to find a genotype that requires minimum pretreatment so that producers can maximize the amount of sugar extracted from the poplar’s cellulose.  But pretreatment of chipped Poplar pretreatment options include dilute acid, hot water, ammonia fiber expansion, and sulfur dioxide steam explosion still allows for greater separation of the cellulosic sugars from the lignin.

Gustafson says the poplar’s lignin content — a polymer that provides the glue in the tree’s cell walls — can be lower and is more reactive in poplars than other tree species, which makes it easier for bio-refiners to get at the species’ cellulosic sugars.

Poplar’s fermentable glucose sugars are mostly extracted from the tree’s cellulose.  But hemi-cellulose, another polymer that gives the cell wall it strength and structure, can produce alternative fermentable sugars like xylose.  Gustafson says a steam explosion pretreatment catalyzed by an acid can help break down the hemi-cellulose.

Gustafson says they would then use enzymes to break down the cellulose into individual glucose molecules.  From there, its glucose molecules would be fermented.  The Poplar’s lignin is itself a byproduct that can be fed to a boiler to generate electricity and steam helps offset some of the costs.

All of which makes poplars a competitive choice as a source of fermentable glucose.

Among willow, eucalyptus and poplar, Tuskan said poplar is the most attractive and is equally competitive with herbaceous perennials.  “Poplar can be harvested continually throughout the year so you can customize your harvesting and delivery based on projected market demand.”

Poplar is not like superdense petroleum, where you can move it all around the world for almost no money, said Gustafson.  Even so, bio-energy plans for the feedstock remain in development.

The Southeast Regional Partnership for Integrated Biomass Supply Systems (IBSS) is, in collaboration with AHB, establishing a commercial-scale demonstration of Cottonwood and hybrid Poplar on almost 70 acres in Mississippi, said Tim Rials, the partnership director at the Center for Renewable Carbon at the University of Tennessee.

Tuskan also assessed the possible percentage of the renewable market that will actually be captured by bio-ethanol from poplar.