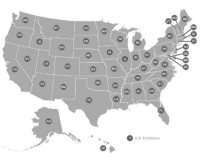 Washington, D.C., United States – Despite the sluggishness of FITs and the belly flop of PACE programs, 2010 was still a robust year — once again — for renewable energy policy at the state and local levels, especially with respect to net metering, interconnection standards and RPS policies.

The DSIRE team, which scours the U.S. high and low for new policy developments, has compiled a Top 10 in ’10 list that summarizes the most significant developments of last year.

Colorado enacted legislation in June that allows community net metering (“solar gardens”) in the service territory of investor-owned utilities. PV systems up to 2 MW that have at least 10 subscribers are generally eligible. Each subscriber will receive kWh credits on his or her utility bill in an amount equal to the proportion of shares he or she has in the project. The Colorado Public Utilities Commission will begin a rulemaking process by October 1, 2010, to develop rules for the program.

Hawaii’s feed-in tariff program has opened on all islands within the service territories of HECO, HELCO, and MECO. This incentive program is administered by Accion Group, which has created a new web site for prospective applicants.

New Jersey has become the first U.S. state to establish a mandatory target for offshore wind in an RPS policy. Legislation enacted in August 2010 calls for the New Jersey Board of Public Utilities to develop a percentage-based standard sufficient to result in 1,100 MW of installed offshore wind capacity. The new law does not include a timeline for achieving this target, and other policy details remain uncertain. However, the law does provide that the offshore wind carve-out will not increase the existing Class I renewable energy requirement.

Due to unprecedented demand for funding from the Ohio’s Advanced Energy Fund, the state’s public benefits fund, all funding opportunities have been suspended as of November 5, 2010, in order to allow the Ohio Department of Development to process applications that were previously submitted. With the Advanced Energy Fund scheduled to expire at the end of 2010, future funding opportunities for renewables remain uncertain.

On March 18, 2010, the governor signed HB 3680, significantly modifying Oregon’s generous Business Energy Tax Credit.  This legislation reduced the maximum cap on tax credits to wind projects over 10 megawatts, set a sunset date for the tax credits, capped the program budget, and allowed the Oregon Department of Energy more discretion in awarding tax credits. The cap for tax credits for large wind projects was reduced from $10 million to $3.5 million in 2010, $2.5 million in 2011, and $1.5 million in 2012.

The West Virginia Public Service Commission has adopted vastly improved net metering rules that will take effect in August. Not only did the commission raise the system capacity limits for commercial and industrial customers to 500 kW and 2 MW, respectively, but it also increased the overall program capacity to 3% of utility peak load. The new policy also allows for meter aggregation (within two miles of generation) and perpetual kWh rollover at the retail rate.

This article was originally published by the Interstate Renewable Energy Council (IREC) and was reprinted with permission.