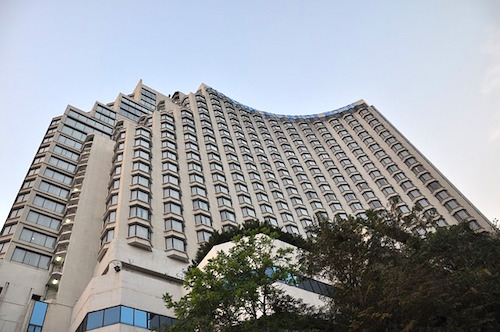 In the 32 flats cooperative housing society I grew up in, comprising of two buildings in the heart of Mumbai, no one had air-conditioners for the fifteen years I lived there until I left for college in New Delhi. Only about six families had cars. There was sufficient space between and along the sides of the buildings for parking the cars, and yet leave plenty of room for children to play, safely, within the society’s compound. Today, cars are crammed at every available spot around the periphery of the buildings, and nearly all flats have at least one air-conditioning unit.

Should I rejoice at the rising wealth, and the increased standard of living, represented by a plethora of home appliances including thin TVs with hundreds of channels, laptops and smartphones connected to broadband Internet, air-conditioners, induction cookers, microwave ovens, washing machines, and cars in practically each home?

All around me in Mumbai, in unlikely places such as the campuses of former textile mills, for which Mumbai was once famous, we now have high-rise office buildings, as shiny as in any metropolitan city in the world. They look impressive in tinted glass and silver, towering in the midst of the clutter of small retail stores and housing societies like the one I grew up in.

Each tall building, an air-conditioned hulk, emits a lot of heat during the day from centralized air-conditioning. The proliferation of cars and two-wheelers also adds to the heat. I wonder: Do the air-conditioning boxes in the windows of each apartment mean that the cooling load for the apartments now surpasses the ability of fans to handle, that sea breeze does not contribute sufficiently to cooling, and that every family needs air-conditioners? The air-conditioning units of course also contribute to the city’s warming.

Everyone in Mumbai appears to seek pockets of cool, segmented living spaces — offices, homes, and cars. What once worked, fans, sea-breeze, and open spaces with circulating air, no longer suffices. Certainly, I visit Mumbai’s malls by taxi to rarely shop, mostly window shop, and largely walk as exercise in the air-conditioned cool.

With increasing frequency, I see BMWs, Mercedes, and Jaguars on Mumbai roads. Their presence is absurd. In Mumbai of narrow streets, chock full of people walking randomly, and all transport modes jostling to get ahead — handcarts to buses to two-wheelers and cars — these relatively over-sized imports barely move for 10 seconds at 40 km/hour, let alone at over 120 km/hour for hours for which they are designed. What do cars mean in Mumbai? They are not for commute or occasional distance driving alone; they are expensive, branded, segmented, few cubic feet of chilled spaces.

Cool cars have a whole new meaning in India. Sure, they help us move about, which is their avowed purpose, but not infrequently, and if you do not mind breaking into a sweat and jostling with crowds, walking to common destinations like restaurants, schools, or retail stores is faster.

As high schoolers growing up in Mumbai, we went strolling each evening to the Dadar beach. We could easily walk for over forty-five minutes in each direction from Dadar to Mahim, and vice versa. There were portable stalls selling bhel-puri, horse rides for children, and even portable, noisy, metallic merry-go-rounds. A fair-like atmosphere prevailed every evening. No longer. The beach has disappeared. The apartment buildings lining the beach, which once we regarded as privileged locations, now have water lapping their walls. I am told the apartments in them are no longer prime properties; in fact they can no longer be sold.

Most of Mumbai does not formally know about global warming. But the natives have experienced the rising heat, encroaching ocean waters, and disappearing coastline, and treat their cars as much for commute as for cooling off. Perhaps only half of Mumbai cars have air-conditioning; the rest merely offer the solace of air through open windows while moving. Several hundred cars are added to Mumbai’s car population each day, likely several thousand air-conditioners are added in apartments. Air conditioning is therefore an explosively growing market for retail stores, cars, apartments, and more, and with it, Mumbai is an exponentially heating city. Since the roads and footpaths are largely fixed, in India’s cities, with Mumbai as exemplar, I see the growth of litter-and-garbage filled, hot, and crowded dystopias.

The talk of Smart Cities appears cruel, even comic, in the midst of infrastructure decay and the visible and audible disorder. I wish to run away from urban centers, not smarten them. I wish for the benefits of urban-equivalent access to services through ultra-high speed, symmetric broadband that enables shopping and telecommuting to work. I desire open spaces merely to walk, with even surfaces and obstruction-free footpaths, and not the confinement of cities, however smart. Is the talk of Smart Cities a marketing ploy, like the smart grid for electricity, a semi-baked idea conjured up by consulting companies to grow their business?