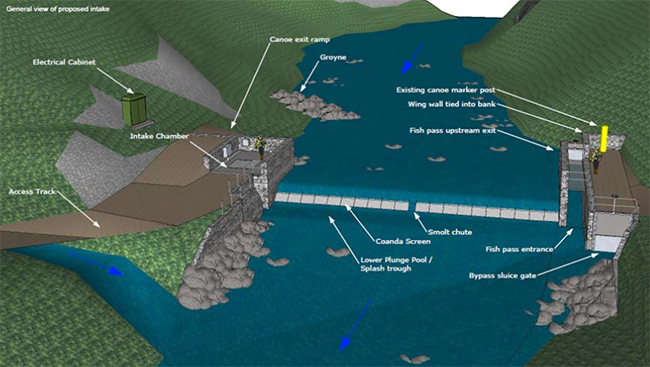 RWE Innogy UK Ltd. is awaiting a decision by the end of August or in early September on its resubmitted planning application for the run-of-river US$17 million, 5 MW hydroelectric project located across Conwy Falls and Fairy Glen near Betws-y-Coed, the principal village of Snowdonia National Park, in northwest Wales, UK.

RWE Innogy UK submitted its planning application the second week of August and said the review should last between three and five weeks, which would produce a decision at the end of this month or the first part of September.

In March, HydroWorld.com reported the Snowdonia National Park Authority rejected the Swindon, England-based compnay’s application. After its initial proposal was declined, RWE Innogy UK said it has addressed the authority’s concerns and resubmitted its proposal.

Estimates from RWE Innogy UK indicate the facility will be capable of annually generating up to 15,000 MWh to supply the average annual domestic requirements for more than 3,200 households. The 11-kV grid connection from the scheme to the substation in Betws-y-Coed is planned to help save up to 7,110 tons of carbon by reducing emissions from burning fossil fuel for energy.

RWE Innogy UK Ltd. is one of several UK energy-related subsidiaries of Hamburg, Germany-based RWE Innogy GmbH. In addition to its presence in Germany, the company also has locations in Spain, Poland and the Netherlands.

Formed in 1990, RWE Innogy UK was formerly RWE Npower Renewables Ltd., prior to changing its name in 2014.