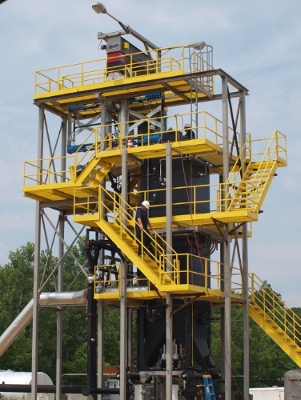 PHG Energy (PHGE) is preparing to file with the Tennessee Department of Environment and Conservation an environmental permit to build a biomass gasification plant in eastern Tennessee, a PHGE spokesperson said in an Aug. 28 interview.

Sevier Solid Waste in Pigeon Forge, Tenn., engaged PHGE to build the new plant, which will be capable of converting more than 30 tons of composted material daily into thermal energy, while producing a valuable high-carbon biochar, PHGE said in an Aug. 27 statement.

According to PHGE, its gasification plants employ a thermo-chemical process that converts biomass to a combustible fuel gas. The company said that about 90% of the biomass that is gasified in the PHGE system becomes fuel gas, and the only remaining residue is a charcoal-like biochar.

Sevier Solid Waste operates a garbage composting plant that processes more than 100,000 tons annually from the Tennessee cities of Sevierville, Gatlinburg and Pigeon Forge, as well as the Great Smokey Mountains National Park. All the municipal solid waste is processed through the plant, with 60% of that waste being made into compost.

Biochar produced at the new plant will be sold to a local industrial user as a renewable source of fuel to displace coal consumption, the company said.

“This new installation will help us reduce the amount of compost we need to transport by converting it into a biochar material, creating a new revenue stream for us,” Tom Leonard, director of Sevier Solid Waste, said in the Aug. 27 statement. “The energy from the gasification system will be used in a thermal oxidizer promoting odor control in the buildings and will allow us to defer other upgrades. This represents a significant savings from our current disposal and operating costs.”

PHGE partnered with energy consultant ARiES Energy to develop the project, which PHGE estimated will cost $2.25 million. According to the company, the new facility represents PHGE’s second large frame gasifier project in Tennessee. The other facility will be located in Lebanon, Tenn., and is nearing the groundbreaking phase, the company said.

For the Pigeon Forge facility, PHGE will provide the gasifier, thermal oxidizer, and material handling equipment, and build the facility as general contractor.

The company’s spokesperson said that submitting the application for an environmental permit is the first phase of the project. There will be a public comment period prior to granting the permit, and PHGE anticipates it will begin construction on the new facility in early 2016, she said.