More
Home Baseload Hydropower Perspectives: All In for Hydropower

I’ve observed and reported on numerous notable events in the hydropower industry over the past 24 years. Sometimes I catch myself wondering: “Have I seen it all?”

Last month helped me answer that question with an emphatic “NO!” I saw something I’d never seen before … a U.S. government Cabinet member appear before a group of hydropower professionals.

On April 29, 2014, U.S. Department of Energy Secretary Dr. Ernest Moniz spoke at the National Hydropower Association’s annual conference in Washington, D.C. Dr. Moniz is the highest-ranking administration official ever to address attendees at an NHA conference. 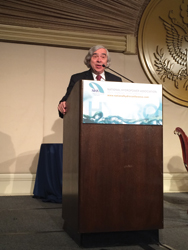 The Secretary appeared at the conference to release a new renewable energy resource assessment that estimates as much as 65,000 MW of new hydroelectric power capacity could be developed across more than 3 million American rivers and streams. He also announced a work effort being undertaken to create a long-term plan for how to develop these uncultivated hydroelectric resources.

Here’s one quote from Dr. Moniz’s speech: “The United States has tremendous untapped clean energy resources, and responsible development will help pave the way to a cleaner, more sustainable and diverse energy portfolio. As the Energy Department works with industry, universities and state and local governments to advance innovative hydropower technologies, the resource assessment released today provides unparalleled insight into new hydropower opportunities throughout the country.”

I distinctly remember when the U.S. hydropower industry was desperately trying to get someone … anyone … at DOE headquarters to acknowledge hydropower even existed, let alone offered benefits and could/should be further developed. It appears those days of hydro getting overlooked, pushed aside, called a “mature” technology with no opportunity for growth (and I could go on!) are in the distant past. When the person responsible for all things energy in the U.S. government takes time to appear before the industry and acknowledge what you in the industry know so well … that hydro brings unique value to the U.S. energy portfolio and has the potential to contribute much more … it’s a landmark. Something I’ve certainly never seen before.

Now, I am not so naïve to think that one speech changes everything. Of course, time will tell. Yet, from my perspective, I do see DOE making a commitment to hydropower like I’ve never seen before.

The department is initiating the development of a long-range national “Hydropower Vision.”* According to DOE, this effort will establish the analytical basis for an ambitious roadmap to usher in a new era of growth in sustainable domestic hydropower over the next half century. The development of the Hydropower Vision … expected to be complete by July 2015 … includes:

– A close examination of the current state of the hydropower industry

“Hydropower can double its contributions by the year 2030,” Dr. Moniz said. “We have to pick up the covers off of this hidden renewable that’s right in front of our eyes and continues to have significant potential.”

Over the next year and a half, DOE staff and contractors will be “all in” when it comes to hydropower. And, they are asking equipment manufacturers; environmental organizations; federal, state, and local government agencies; utilities; developers; independent power producers; research institutions and laboratories; and associations to join them.

Don’t let this opportunity slip by. Find ways to get involved. Be all in for hydropower.

*For more on the Hydropower Vision, visit: http://energy.gov/eere/water/new-vision-united-states-hydropower. To get involved, email hydropower.vision@ee.doe.gov.