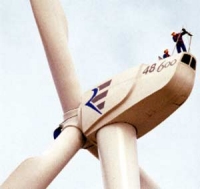 Hamburg, Germany [RenewableEnergyAccess.com] Having smoothed over a patent conflict with GE Energy, Germany-based commercial-scale wind turbine manufacturer REpower Systems is entering the U.S. market with a substantial order of turbines.

Fifty-six MM92 turbines are to be supplied to wind project developers enXco Inc., the U.S. subsidiary of EDF Energies Nouvelles in 2007. According to REpower, this will not only be REpower’s first U.S. turbine order, but also the company’s largest order yet worldwide. An option for a further 19 turbines of the same type was also arranged. enXco is to install the wind turbines on the West Coast of the United States. The REpower development centre in Rendsburg (Schleswig-Holstein, Germany) has created a technical solution for a 60 Hz version of the MM92 turbine that corresponds to the requirements of the American electricity network. REpower is also able to enter the U.S. market through a cross-license agreement concluded with its competitor, GE Energy, in regard to the use of several patents. “The license agreement concluded with GE is the foundation for a successful growth story in the USA. Dimensions are traditionally bigger there — so it is fitting that our first U.S. project is also the largest single order in the history of REpower,” said Fritz Vahrenholt, Chairman of the Executive Board of REpower Systems AG. The two companies, previously at odds over their respective wind turbine technology, were entered into litigation and patent negotiations over the past few years. This issue had prevented REpower from competing in the large U.S. marketplace. “Due to the general change in thinking in American energy policy, which involves moving away from oil and towards alternative forms of energy, the USA is now a large, attractive market for wind energy,” Vahrenholt said. The turbines will be produced exclusively at the REpower production site in Husum and will be prepared for shipping from there — either from Brunsbuettel or Hamburg. This U.S. order comes alongside a large Australian order, the second largest for REpower, according to Fritz Vahrenholt, Chairman of the Executive Board. The company was commissioned to supply 29 wind turbines by the Australian company Pacific Hydro Pty Ltd. Pacific Hydro is one of the largest Australian companies in the wind and water power sector. REpower’s MM82 turbines were chosen for the “Portland Stage II” project in the South-Eastern Australian state of Victoria and have a total rated power of 58 megawatts (MW). The Stage II project is part of a larger wind farm development in the Portland area, which has a planned total output of 195 MW and covers four different locations. A decision is yet to be made on the allocation of the orders for the remaining stages of the Portland wind energy project.