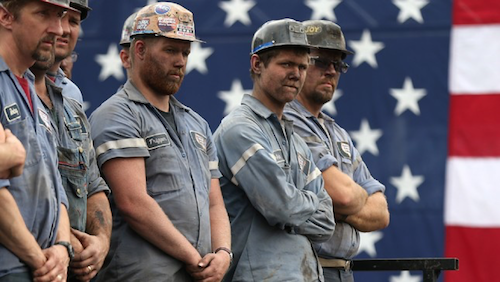 Divided was the third most quoted word given by U.S. voters in response to a recent Associated Press-NORC Center for Public Affairs Research poll asking for a one-word description of the current state of the union. Confused ranked fifth.

These responses correctly capture the cause of uncertainty that has been the theme of this series of articles on the reality of meeting the U.S.’s promised emission reduction targets. Or, in terms of the Paris Accord, nationally determined contributions (NDCs).

The dichotomous direction of policies and programs in support of a domestic clean energy economy is by no means limited to national politics or the federal judiciary. Present and emerging divisions within and between the states, as well as within and between clean energy-environmental organizations must be recognized as potential sources of division and confusion impacting the likelihood of reaching the promised NDCs.

In today’s reality the states are the leaders of the battle against climate change. Congressional gridlock, resulting in the failure to enact policies and programs able to keep current with environmental challenge, means primary responsibility for the passage of government initiatives has [d]evolved away from Washington.

This evolution has nowhere been more recognizable than in the Clean Power Plan (CPP). Although USEPA has established carbon emission targets, the Agency has refrained from being overly prescriptive about how those targets are to be acquired by each jurisdiction.

From my perspective granting flexibility to the states was not only reflective of political realities but of practical ones. There is no one size fits all, when it comes to how to win the climate battle. As I have commented in the past, technological and procedural diversity is important to the discovery of what works and ultimately to the soundness of the battle plan.

The role and the considerable accomplishments of state policy makers in support of increasing reliance on clean energy sources should not, however, cause us to lose sight of the uncertainty introduced by certain other state actions. As a class, the states are neither unanimous nor consistent in their commitments to slow the pace of global warming. Dichotomous actions infuse a degree of confusion as to the direction truly being taken.

Once again the events surrounding the CPP are a sign of the times. West Virginia, along with 26 other state BFFs are docketed in opposition to the Plan. A number of these plaintiff states—ironically—rank highly in the amount of non-hydro renewable electricity that is generated within their borders. 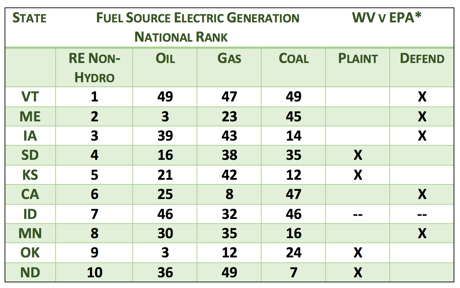 *Plaintiff (Plaint) or Defendant (Defend) in the CPP case of West Virginia v. EPA
Based on https://www.washingtonpost.com/graphics/national/power-plants/

It is understandable that a state whose economy is or has been heavily reliant on mining and/or oil and gas industries might want to oppose the CPP. Whether such opposition is justifiable from an economic point of view, it appears to be so as a matter of politics.

The fallacy, followed by West Virginia politicos and others, starts with believing that the claims of coal mine owners are correct. Bituminous’s biting the dust is no more the fault of renewables and liberal scions than is the slowed advance of anthracite. Coal’s demise is based upon its inability to compete–straight up–with natural gas today and renewables today and tomorrow.

It is also a function of the increased willingness of policy makers to acknowledge what even casual observers can see—coal pollutes, our waters, land and lungs. Pollution costs, in terms of health and human welfare. Even were Earth not warming, coal is no longer king; and, society can no longer afford to keep the king in the style to which he has become accustomed.

No one likes seeing miners lose their jobs, any more than any one wanted to see the firemen on steam locomotives lose theirs. Efforts to prop up positions that are the victims of progress and the over-riding needs of society, however, defy market realities and only serve to delay the inevitable. More unfortunately, they introduce an element of uncertainty in moving fast enough to reduce the rate of global warming.

Diggers and drillers are not the only ones opposed to environmental regulation and the near-term transition to a clean energy economy. Utilities that resist renewables and fail to embrace distributed models of generation are on the front lines of efforts to slow adoption of renewable energy technologies.

According to a recent study of state-based actions having a potentially negative impact on consumer solar applications:

At the state level, the general trends are that solar rebate incentives are decreasing, solar tax incentives are expiring, renewable portfolio standards are nearing their targets, net metering caps are being reached, and net metering and rate design are undergoing regulatory and legislative review.

Although not as successful in their outcomes as opponents might hope, they do slow the pace of transition. They can also serve to disrupt investments in clean energy and environmental technologies, as they plant seeds of division and confusion; at the least, they offer sufficient reason to cause investors to wait until the winds of uncertainty settle.

As true of the previous parts in this series, it is not my intention to cast doubt on the considerable progress our industry and nation has made in advancing the cause of a clean energy economy and a sustainable environment. It is to make readers aware that it ain’t over until it’s over.

Tune in next time when I discuss divisions I see emerging within the energy and environmental advocacy communities.

Read more in the series:

Part I: It Ain’t Over Until It’s Over — A COP21 Reality Check

Part II: Are You Ready for Some Paranoid? Insights into Policy, Politics and COP21 Climate Goals

Part III: The Certainty of Uncertainty: Energy, Environment and the US Presidential Race

Part IV: Ranks and Hackles—COP21 and Judicial Review of the Clean Power Plan

Part VI: The End Is Nigh — Advocacy, Climate Change and Renewables Growth