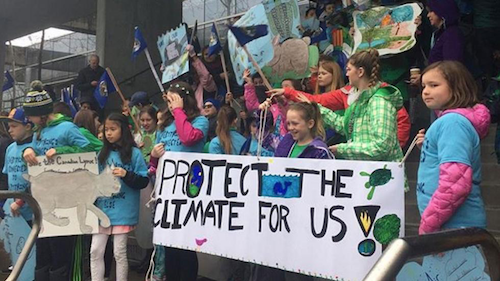 I interrupt the Justice Delayed series for something slightly different. The series has thus far focused on the challenge to EPA’s authority in the matter of the Clean Power Plan (CPP). Today, I want to shift the discussion to a law suit filed in the federal district court in Oregon.

The 21 plaintiffs, ranging in age from 8-19, are accusing the defendants of violating their constitutional rights under the 5th amendment’s due-process and equal protection principles, as well as the 9th amendment’s guarantee of the right to inherit “a stable climate system.”

The relief requested by these young climate champions is an enforceable court ordered national plan mandating a decrease in atmospheric CO2 to 350 parts per million by the end of the century. A target far more stringent than the CPP.

The case is currently pending a decision on a motion by the U.S. Department of Justice (DOJ) and industry intervenors, including the National Association of Manufacturers (NAM), to dismiss the case. Arguments were made on Sept. 13 before Judge Ann Aiken of the U.S. District Court for the District of Oregon. The DOJ and NAM contend that the plaintiffs lack standing because: the claimed harm lacks specificity; the harm cannot be traced to actions of the defendants; the plaintiffs have no constitutional right to a carbon free environment; and the public trust doctrine does not apply to the atmosphere and, therefore, the government bears no responsibility.

Thomas M. Coffin, the magistrate judge, wrote in his order permitting NAM and other industry interests to intervene in the case:

Plaintiffs assert that the actions and omissions of defendants…increased CO2 emissions “shock the conscience,” infring[e] the plaintiffs’ right to life and liberty in violation of their substantive due process rights. Plaintiffs also allege defendants have violated plaintiffs’ equal protection rights embedded in the Fifth Amendment by denying them protections afforded to previous generations and by favoring short term economic interests of certain citizens….Finally, plaintiffs allege that defendants have violated the public trust doctrine, secured by the Ninth Amendment, by denying future generations essential natural resources.

The procedural question of standing is nearly as important as the substantive issues. If the plaintiffs’ right to sue is upheld, it would establish the right of citizens to pursue polluters and to demand of government an enforceable framework of further protection. The prospective precedent is more than a little frightening to industry.

Once the road is open, citizens can extract a heavy toll on those who would violate those rights. Redress of citizen grievances against the private sector could take any form from restraining orders to actual and punitive damages for what amounts to a  As regards government defendants, courts could order proactive enforceable climate change frameworks—a right that currently resides with legislators and chief executives.

This is not the first time that the plaintiffs’ attorneys at Our Children‘s Trust have attempted to establish a citizen’s constitutional right of a clean environment. In an earlier suit, plaintiff counsel argued that the federal government was obligated under the Public Trust Doctrine to regulate greenhouse gasses. The lead plaintiff, Alec L., stated:

Climate change is the most urgent issue of intergenerational justice that perhaps our species has ever faced….This is more important than anything to members of my generation, and no matter how many times we are turned away, we will continue to fight.

This earlier argument was rejected on appeal by the federal district court in the District of Columbia—Justice Garland presiding.

The doctrine of public trust goes back to the Roman Emperor Justinian. It has been a part of the American legal system since the Constitution was ratified. The doctrine directs government to hold essential natural resources in trust for present and future generations. Although the Emperor claimed custody, it does not currently extend in the U.S. to the air we breathe.

A particularly snarky comment on the case was made by H. Sterling Burnett of the Heartland Institute:

This is purely political — a liberal judge putting his personal opinions on climate change above the law…. The Obama administration has gone around our elected representatives to enact draconian restrictions on greenhouse gas emissions, yet for these kids that’s not enough.

…this case “should have been thrown out of court….since the children can’t show they have or are or will be harmed …burning fossil fuels does not violate any portion of the Constitution or the bill of rights… Rather, burning oil and gas contributes greatly to life, the pursuit of happiness, and the general welfare.

Burnett has a right to be worried. If the “children” are granted standing, courts could have significantly more sway over the fight against climate change.

For the courts to have the power to direct the legislative and executive branches of government to get off their damn duffs and enact enforceable and sufficiently strident environmental regulations, the Kelsey case or a surrogate will have to go the full distance—to and through the Supreme Court of the United States.

Although no federal case in the U.S. has succeeded in securing a citizen’s right to sue the government over environmental indifference and regulatory inadequacies, there is an emerging trend both here and abroad. The Our Children’s Trust is pursuing the rights of young plaintiffs in a number of state jurisdictions and has vowed to continue the fight at the federal level.

It should be noted that the age of the plaintiffs is not just a matter of public relations. Having most of their young lives ahead of them, the cumulative harms to young bodies that flow from today’s pollution and tomorrow’s exponential degradation of the environment is significantly more than it would be for an old fart like me.

In recent years courts in the Netherlands and Pakistan have rendered decisions in support of citizens. Last year a Dutch judge ruled that the government plan to reduce emissions by 17 percent by 2020 was below the 25-40 percent international norm. The government was given five years to clean up its act.

The Supreme Court of Pakistan has given a seven year old standing to pursue his rights to a clean environmental future. Just this past week, the International Criminal Court announced it will give special consideration to pursuing crimes involving environmental destruction.

The pursuit of citizen standing to sue governments for actions harmful or insufficient to preserve the health, welfare and future of the planet for current and coming generations may not be an example of justice delayed. It is, however, a growing effort to have justice better defined.

Look for the next in the series of Justice Delayed: The Clean Power Plan.

Part II: The Clean Power Plan: Justice Delayed — For Whom the Rule Tolls

Part IV: Justice Delayed — Will Politics Trump Justice in the Case of the Clean Power Plan?