More
Home Baseload Bioenergy Part 2: What To Do With All This Waste? 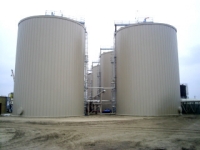 Yesterday, RenewableEnergyAccess.com took a look at companies that are working to make energy from residential and commercial waste. Today we look at others that are converting fecal waste from cows, horses, pigs and other livestock into energy.

Like landfill waste, manure can be burned or it can be broken down in anaerobic conditions to create biogas. Both techniques have been common in Europe, but are only now gathering momentum in the U.S., a country rich with agricultural waste.

“There’s enormous potential for renewable natural gas in this country,” says Mark Hall, Senior Vice President of Environmental Power Corporation, a New Hampshire-based renewable energy project developer. “Nobody has really calculated what the full energy output might be if it these [anaerobic digestion] technologies were deployed across the entire U.S., but there are so many potential operations, we’re a long, long way from fully exploiting it.”

Anaerobic digestion is the decomposition of organic matter in the absence of oxygen. When the matter breaks down, methane is created. That methane, called biogas, can be cleaned up to natural gas standards and be used for both fuel and electricity.

Microgy, a subsidiary of Environmental Power Corporation, recently completed the country’s largest manure-to-biogas plant in Stephenville, Texas. When up to full production capacity in the coming months, the Huckabay Ridge facility will produce approximately one billion cubic feet of biogas each year with an energy content of 635,000 Million British Thermal Units (MMbtu) for homes in Texas, California and Colorado. Starting in October of 2008, The California utility Pacific Gas & Electric will receive 2,000 MMBtus of the biogas each day through its natural gas pipelines.

The Huckabay Ridge facility is made up of eight 916,000-gallon anaerobic digestion tanks which will process the manure from 10,000 cows yearly. Because the tanks are “complete mix digesters,” they can handle many other types of agricultural waste such as animal fat and grains. The technology can be deployed on any scale, making it attractive to farmers who simply want to get rid of their waste and make some extra money as well as utilities that need to fulfill their renewable energy procurement obligations. And now that natural gas prices are on the rise, says Hall, biogas is becoming more cost-competitive.

“The change that we’re seeing now where natural gas prices have doubled and even tripled makes it a lot more attractive to do these kinds of projects, and I think we’ll see a lot more of that in the next 5-10 years,” he says.

Craig Harting, CEO of Global Green Solutions, agrees with that assessment. He believes his company will play an important role in the emerging waste-to-energy market in the coming years. Global Greensteam, LLC, a subsidiary of Global Green Solutions, is working on commercializing its Global Greensteam technology, a cyclonic burner that converts construction and agriculture waste into steam. According to the company, the technology will produce steam 30 percent cheaper than steam from natural gas with minimal carbon dioxide and nitrous oxide emissions.

Last month, Global Green Solutions and the Florida Thoroughbred Breeders’ and Owners’ Association (FTBOA) entered into negotiations to form Florida Greensteam Equine Energy, LLC. The envisioned company would construct multiple facilities to convert the state’s large amount of horse muck into energy and sell it to a utility under a power purchase agreement.

According to the FTBOA, the world’s top racehorse breeding region, Ocala, generates over 400,000 tons of manure each year. About two-thirds of that manure can be used for fertilizer or composted, but the remaining one-third can become an environmental hazard if stored improperly and allowed to leak into the water table, which it often does.

“There’s no place for this muck to go. You can’t burn it and you can’t landfill it, so we’re solving a serious problem for the area,” says Global Green’s Harting.

Because the Greensteam can convert most types of solid waste into energy with little greenhouse gas emissions, Global Green says it will cost-competitively deploy its technology at landfills and livestock operations all over the country, lowering waste and reducing dependence on fossil fuels — all while making a profit.

“People are recognizing that there’s a solid biomass problem in this country that has to be addressed. We’ve now reached a tipping point and we think this is a significant business opportunity. There is so much potential for these technologies, and I think collectively, we have only scratched the tip of the iceberg,” says Harting.