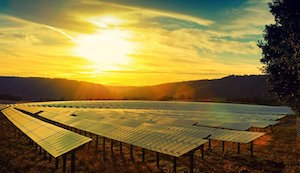 March 9, 1993: During the Soul Train Music Awards, a sprained ankle reduced one of the greatest live performers, Michael Jackson, to continue the show while seated. Remember the time. Tied to the chair, yet moving the entire crowd with his unrelenting energy, Mr. Jackson channeled all his passion and presented a spectacular performance; tied down or not. A standing ovation, and chants echoed in the arena.

The renewable energy industry in Pakistan has played the same role developing and gaining momentum. The industry, with a huge potential of not only abundant solar and wind resources, but also with the dire need of the country for power generation through clean methods, is surviving and evolving every day without any major government support in form of policies, such as tax rebates and subsidies.

Implementation of net metering amidst the power short fall is a booster, especially for small-scale solar PV. The enterprise and the residential sector is to be benefited; selling excess energy yield of their solar PV installations back to the grid and contributing, although in a relatively small way, to mitigating the electricity supply and demand deficit. As further investments come in, and as ongoing projects are completed, wind and solar energy incorporation into the national grid, on both transmission and distribution levels, are to see a massive rise in the following year.

With this unprecedented rise of variable renewable energy (VRE), a foresight approach is important for the stakeholders to achieve market sustainability and grid stability.

VRE generators, on transmission level of the power grid, pose challenges that contrast with the conventional power generation methods (fossil fuels and hydro power). This is due to the concepts that underlie their operation.

Due to their sources being intermittent in nature, the operation of power production by VRE generators is relatively unreliable as compared to conventional generators. Depending on the weather, the output of the VRE plant may decrease than the rated value or may increase in several events. This variability can present challenges depending on the level of penetration and the characteristics of the conventional generators in the grid.

In an occurrence of low power, the power offset between VRE plant output and the consumer demand needs to be fulfilled by the conventional generators fast enough not to affect frequency stability and major voltage changes. High level penetrations of VRE plants, on the transmission level, can lead to noticeable power fluctuations causing a rift in the supply and demand, voltage imbalance, reverse power flows, frequency fluctuations, and distortions in power quality.

VRE plants exhibit different behaviors when it comes to fault conditions in the grid and measures taken to rectify those faults, in contrast to conventional generators who have inherent capabilities to deal with them. This includes reactive power capability for voltage control and reduction in grid losses and active power regulation for frequency support. The frequency is dependent on the balance between energy generation and energy consumption in a power system; load variations or intermittent generation can cause power dips and frequency deviation from the set thresholds.

Voltage, in the power system, is dependent on reactive power management, which may be generated from the power plant.

To cope up, along with developing reactive power generation, the VRE plants need to be connected to the grid for a limited period during grid faults (fault ride through capability) in order not to endanger the power balance and maintain Voltage. VRE plants would operate in a set threshold of voltages and frequency and would disconnect if the values of the grid voltage or frequency would cross the bracket.

Large amount of VRE plant shut downs can lead to further Load shedding as evident from the famous partial black-out in Continental Europe in November 2006 where inappropriate grid code settings led to 11 GW of wind and co-generation plants going offline in the medium voltage network, due to a major disturbance in the grid causing a frequency drop to 49 Hz, which resulted in more power plants shut down.

In events of excess power generation, at distributed level; when the smaller plants’ output exceeds the local electrical load requirements, the voltage can exceed regulated limits. The reversed power flow on the low voltage power line, may, then exceed line or transformer capacity limits. Distributed VRE penetration might also have unwanted effects on the protection systems in the grid, mainly due to load flow challenges and increased fault current contribution. For example, distributed resource current may cause a flawed operation of the distance relays.

In response to these challenges, the VRE generation technologies have evolved adhering to the needs. Coupled with large-scale storage and control systems, VRE plants have eased their ways into the grids. Along with developing the capability of ancillary services for the grid, such as frequency and voltage control, and provision of spinning reserves through their consistent operation at an output lesser than rated (delta control capability — Danish Grid Code), VRE generators have come a long way.

Development of VRE grid codes has also led to a massive increase of VRE generators into the power grid that ensure their safe and reliable operations.

Pakistan sees an immense rise of VRE at transmission level, which as per the country’s Alternative Energy Development Board’s (AEDB) website, is going to make up for 10-12 percent of the total generation capacity. Employment of net metering accelerates the need of catering to these technical demands. This requires serious upgrades in the grid, establishing communication protocols and deploying control and protection systems that cater to this rise.

Fortunately, models can be taken from VRE-rich countries such as Germany, U.S., and Denmark. Effective communication technologies need to be installed to allow interaction of distributed generators to interact with each other and for superior grid management, increasing flexibility and responsiveness. Similarly, grid connection technologies need to be improved and implemented. However, more importantly, a VRE grid code needs to be drafted that is to serve for future enhancements and serve the stakeholders for a longer term, safeguarding grid reliability and safe performance.

Owing to immense deployment of distributed solar, a regulatory framework needs to be developed that pertains to the design, implementation, and commissioning of the distributed generators — installed by the local installers. National Electric and Power Regulatory Authority (NEPRA) of Pakistan along with regional distribution companies would require standardizing the design and commissioning procedures for distributed solar PV installation. Standardization of technology is of added concern here — anti-islanding methods for PV inverters, threshold values of frequency and voltages, grid integration methodologies, grid monitoring times before re-connection upon anti-islanding, ground fault protection equipment, DC to AC ratio limits, PV connector requirements, and more. This will allow DISCOs to perform concrete inspection of the installed systems aiming for a net metering license and provide the strength to the industry’s core that it had been lacking.

Along with these, a quality infrastructure (QI) needs to be developed to filter out sub-standard and underperforming equipment import into the country. Testing and certification authorities should be set-up, providing quality assurance services of the products and equipment.

Local intellect needs to be developed through training and certification. Solar PV and wind are relatively new subjects, and lack of proper equipment, design and operation knowledge has led to sub-optimal installations, which has poisoned markets in the past. The industry lacks certified practitioners, which has led to a sluggish growth in the past. The QI should also take into count quality management systems for local manufacturers and service providers.

The renewable energy market in Pakistan is transitioning from the introductory stage to the growth stage, where it is to see enormous investments and hence deployment of VRE plants. However, it requires concrete policy making and as a pre-requisite technical competence for optimal installations and their safety.

This article was originally published by the author on LinkedIn and was republished with permission.