To say that the bioenergy industry is multi-faceted would be a huge understatement. The catchall term “bioenergy” can be used to describe biomass for power; biomass for heat; biogas — derived from agricultural or animal waste — for power; and biofuel for transportation — which encompasses everything from biodiesel to corn ethanol to second-generation ethanol. Each facet of this enormous industry has its own trade associations, its own set of opportunities and challenges and its own job offerings. It’s often surprising to learn that a forester, an electrical engineer and a chemical biologist can each claim to be part of the bioenergy industry.

Overall, the bioenergy industry continues to chug along, making important strides on the policy front to ensure that governments recognize the renewable and carbon-neutral aspects of this feedstock across the world. The International Renewable Energy Agency (IRENA) released a Global Bioenergy Report in September of 2014 that showed steady growth of bioenergy in all of its forms for the past 20 years. See chart below. 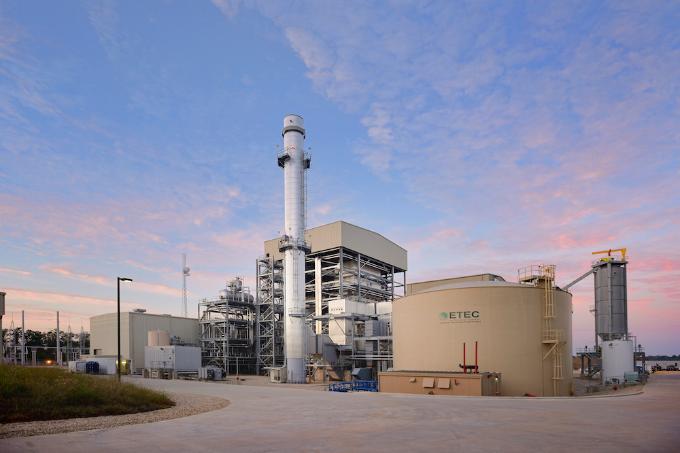 Growth is projected to continue in most bioenergy forms, however the rate of growth for each sector will differ widely by region and technology. On the whole, however, policy challenges may be the single most important obstacle facing bioenergy today. 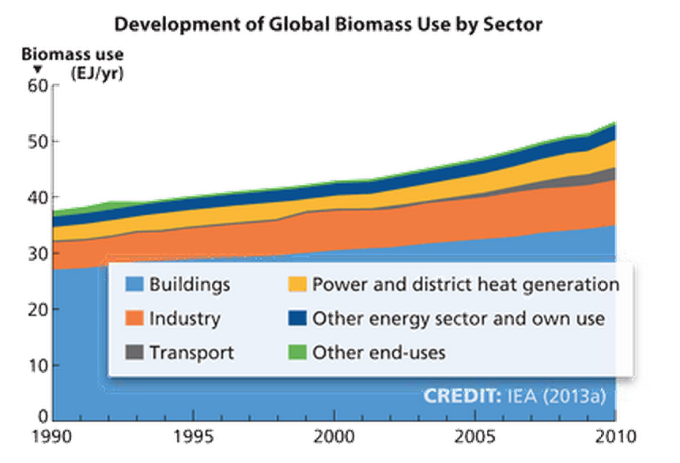 In the west large-scale biomass power plants are not experiencing growth. In 2014, despite some notable plants coming online — the Drax Power Facility in the UK, the Ontario Power Generation Atikokan Generating Station and the Woodville Power Plant in Texas — growth in the industry has slowed. “Frankly, I think you are going to see less growth this year because to develop biomass facilities is a long-term undertaking,” explained Bob Cleaves, President of the Biomass Power Association. Cleaves said that since projects generally take about 4-6 years, those that were completed in 2014 were the result of previous tax incentives that simply don’t exist anymore. 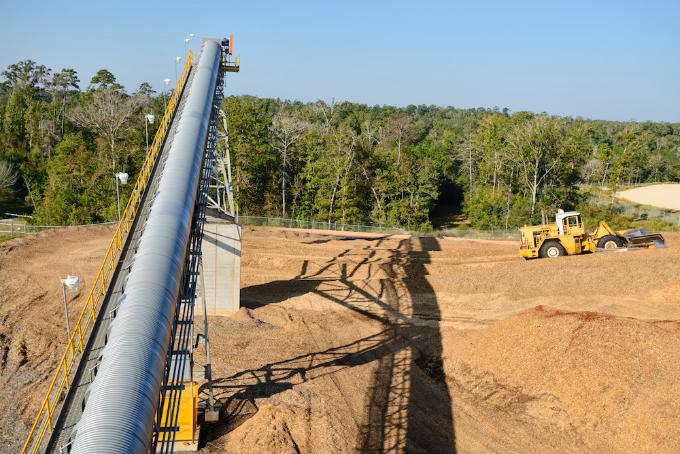 The low stack out conveyor (part of the plant fuel handling system) that delivers wood chips from the truck tippers to the wood yard at the Woodville Power Plant. Credit: Gemma Power Systems.

Cleaves said that without those tax incentives, financing for biomass power plants is very hard to come by.

Dan Martin, President of EPC company Gemma Power, the company that constructed the 50-MW Woodville biomass power plant in Texas, echoed Cleaves. He said Gemma is aware of a few biomass power projects in the works in the U.S. and he’s hopeful “at least one of them would get off the ground [in 2015].”

However Martin explained, “the economics of wood as a power fuel are pretty thin.” He said that without the tax credits and in light of the low gas prices, we will not see much in the way of growth for biomass power plants in 2015.

For 2015, the Biomass Power Association, which is primarily focused on the United States, is working on policy tweaks that will allow existing biomass power plants to continue to function economically, said Cleaves. He is cautiously optimistic that EPA’s Clean Power Plan (111d) will recognize the environmental benefits of sustainably sourced biomass. “2015 is going to be working with the agency [to educate it] about why biomass that is currently being used in the U.S. is sustainably sourced,” he explained. 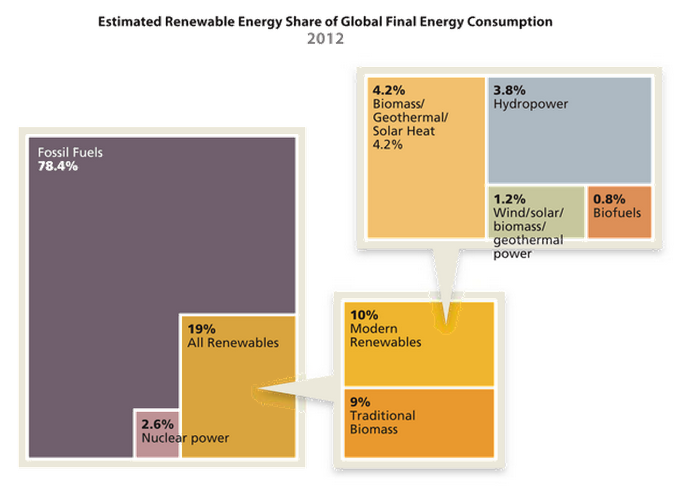 Traditional biomass refers to solid biomass that is combusted in inefficient, and usually polluting, open fires, stoves, or furnaces to provide heat energy for cooking, comfort, and small-scale agricultural and industrial processing, typically in rural areas of developing countries. It may or may not be harvested in a sustainable manner. Traditional biomass currently plays a critical role in meeting rural energy demand in much of the developing world. Modern biomass energy is defined in this chart as energy derived efficiently from solid, liquid, and gaseous biomass fuels for modern applications. Credit: REN21 Renewables 2014 Global Status Report.

In addition, the organization is working with EPA to gain clarity on a non-hazardous secondary waste rule, also called urban waste. This rule would allow urban wood waste to be classified as a fuel source instead of a waste and a favorable outcome of this clarification would also help the biomass power industry in the U.S.

Cleaves was also positive about the growing trend of allowing thermal renewable energy to meet state renewable portfolio standards (RPS’). “A healthy biomass thermal industry is good for us because it promotes more investment in infrastructure and forest products and that is generally a favorable thing,” he said.

Scott Chabina, a director with Carl Marks Advisors, is extremely bullish on the biofuels industry and is excited about what’s to come in 2015. Chabina — who said he hasn’t “had a single day where I am not in the cornfield either physically or mentally since 2008” — explained that for the past year ethanol companies have been diversifying their offerings and now almost every single one of them produces ethanol and “high value co-products.” Chabina said that one reason they were able to make these investments is that Q32013 and the first three quarters of 2014 were “some of the best, if not the best, time to be in the ethanol market. Ever.”

The reasons for their good fortune are manifold he said but suffice it to say that ethanol producers for the first time began to realize profits that they could re-invest in new ventures such as high-value co-products or cellulosic (aka second generation) ethanol plants. Chabina said that the running joke in the industry has been that second-generation ethanol plants have been “five years away forever,” but said that Poet’s Project Liberty, the first second-generation ethanol plant that began operation in 2014 is a sign of things to come. “There are also a number of interesting facilities – the Abengoa facility in Hugoton [Kansas], the Dupont Facility in Nevada, Iowa, [and] Quad County Corn Processors added a cellulosic facility to their ethanol plant,” he said.  Chabina continued:  “So people are putting in the technologies and spending the capital” to make second-generation ethanol a reality.

Chabina isn’t worried that low oil prices will have any effect on the ethanol industry and actually sees no looming threats in the years ahead. “The ethanol industry has lived a couple business cycles in the course of 5 or 6 years. There is an incredible flexibility with these guys,” he said.  A viable export market, however, would let the industry overcome the blend wall problem, he acknowledged.

It’s important to realize that advanced biofuels companies are not just about making fuel. Instead they are focusing on “higher margin specialty chemical and specialty co-products that have the potential to displace a lot of traditional fossil fuel markets,” said Chabina.

In 2014, some northeastern states in the U.S. broadened their RPS’ to mandate the use of thermal renewable energy. Massachusetts for example, now awards alternative energy credits (AECs) to renewable heating and cooling technologies such as biomass. Massachusetts utilities need those AECs to meet their alternative portfolio standards (APS).

Further, said Charlie Niebling of the Biomass Thermal Energy Coalition (BTEC), biomass is finally getting some recognition in the U.S. at the federal level. Niebling explained that in 2014 the USDA awarded more than $2.5 million in grants to develop statewide wood energy teams (SWETs) in 11 states and an additional $1.25 million for nine wood energy projects. “And there is a pending RFP now to fund additional states so probably by sometime this spring there will be 20 or so states that have been actively supported by USDA with these SWET grants,” he said.

Niebling believes this is a very important move and a positive sign for the biomass industry in the U.S. “The USDA is finally after years and years realizing that heat is 1/3 of our nation’s energy consumption and maybe [they] should be paying attention to it,” he said.

Nevertheless, there is trepidation in the biomass thermal industry over the price of oil, Niebling also pointed out. He said that biomass thermal energy is cost competitive when the price of a barrel of oil is in $80-100 range. “Oil prices have the effect of dampening the momentum in the last few years,” said Neibling who added that up until the price of oil started to drop, sales of modern wood-heating appliances were definitely on the rise. “So there’s been a lot of momentum but there is also a lot of trepidation right now,” he said.

Momentum is also the result of more biomass thermal systems in commercial operation today. “Installations are getting better and more competent. People are learning more about what works and what doesn’t,” Niebling said. With more performance data available, potential bioenergy adopters can ask other customers about cost savings and see actual proof that the systems work, rather than having to take a manufacturer’s word for it.

The Opportunity for Biomass

On the technology side, Europe is way out ahead of the U.S. when it comes to improving the efficiency of biomass thermal energy and Niebling believes that soon more of that technology may be available in the U.S. “We’re seeing more and more of the leading-edge, state-of-the-art European technology working its way into the [U.S.] market,” he said. So far, the bigger U.S. manufacturers such as Hurst Boiler and Messersmith have stuck to woodchips, according to Neibling who added that they probably feel there isn’t enough interest in “more sophisticated or more refined pellet engineering.” According to Niebling, “the American boiler manufacturers are really in a slumber when it comes to wood heat. They haven’t awoken to the opportunity.”

Niebling said that the European market for biomass thermal is extremely well established and leading manufacturers such as Froling, Viessemann, Okofen and Windhager may be interested in expanding into other parts of the world. “The heavily heating-oil dependent northeast has been a real target for the Germans, the Austrians and the Scandinavians,” said Niebling.

Biomass for Combined Heat and Power

The best technology according to Niebling, however, would be a ‘cookie cutter,’ reliable and affordable combined heat and power (CHP) plant that would run on biomass and could work at a community scale. “That’s a real frontier of opportunity,” he said. “We need systems that are engineered to meet heat load and that produce electricity as a byproduct of heat generation, not the other way around. Because that’s how you get the really high efficiencies,” he explained.

Niebling said that Turboden, an Italian company that was acquired by Pratt and Whitney Power Systems in 2009, which was then acquired by Mitsubishi in 2012 has a “fantastic” organic rankine cycle (ORC) power plant that runs on biomass and uses waste heat to produce electricity. The company announced in January that it was chosen by Maine Woods Pellet Company to supply the world’s largest biomass-based ORC power unit for its plant in Athens, Maine, United States. Neibling said the technology is “very sophisticated and very expensive,” but addresses a market need that all renewable energy technologies are addressing: distributed generation. “I would love to see the market open up to what Turboden has got and by their leadership persuade others to enter that space. Because I think distributed generation — and you guys have written gobs on this — is coming.”