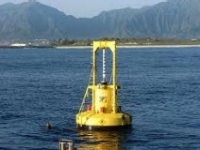 REEDSPORT, Ore. — Hydrokinetic energy developer Ocean Power Technologies Inc. has delayed its plan to install one of its PowerBuoy generating units off the Oregon coast until the spring, HydroWorld.com has learned.

The New Jersey-based company had planned on deploying one of its PowerBuoy systems near Reedsport as part of its ongoing testing, but the early onset of unfavorable weather in the Pacific Northwest has caused OPT to reconsider.

“We were met with a number of challenges, mainly the weather,” says Greg Lennon, OPT’s director of marketing. “The installation crew was being kept, literally, at bay.”

OPT says it was able to get one of the needed three anchors installed before efforts were halted. The remaining anchors will winter in Reedsport, while the generating unit itself will be stored in Portland.

“There is a lot of work that went into this buoy,” Lennon says. “It’s the first commercial-sized buoy in the United States, so we want to make sure we get it right.”

HydroWorld.com reported in September that the Federal Energy Regulatory Commission (FERC) had issued OPT a 35-year license for the project.