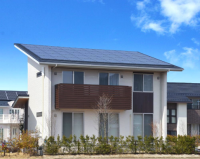 San Diego, Calif. — While most U.S. customers are only able to get green electricity by either purchasing and installing their own system or acquiring a lease or power purchase agreement through a third-party company like SolarCity, Japanese customers will soon have another option. Homeowners and businesses unable to install their own systems will be able to purchase green electricity from existing installations, and those solar electricity providers will be able to receive similar benefits as utilities. 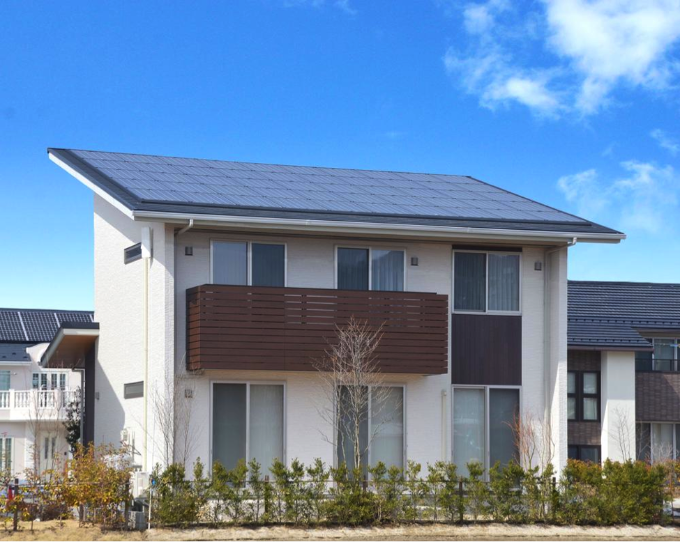 Currently, Japan’s electricity market is partially open to private providers, which includes customers with 50 kW of capacity or greater, but over 96 percent of the market is still dominated by ten vertically-integrated, investor-owned utilities. By 2016, the Japanese government is planning to open up the remaining retail electricity market, which includes customers 50 kW of capacity or less (residential and small business) to fully break up the long-standing monopoly.

As of the end of July, over 300 companies have registered to sell electricity as a Power Producer Supplier (PPS) in the future deregulated retail market, which has an estimated value of 7.5 trillion yen (US $73.1 billion).

Some PPSs are developing traditional fossil-fuel power plants, but quite a few PPSs will be delivering electricity from solar and other renewable energy sources.  In fact, many green PPSs will provide electricity from PV systems developed as a result of the current feed-in tariff (FIT) program.

In May, Misawa Home, a leading housing developer, announced a new program to purchase solar electricity from its customers at a rate above the FIT rate. Customers qualified for this program include homeowners or apartment owners that installed a PV system greater than 10 kW on their Misawa residential buildings under the FIT contract. “Currently 10 percent of our home buyers have PV systems larger than 10 kW,” said a PR manager at Misawa Home.

“In a deregulated market, end-users will choose their energy providers based on three factors — price, environment, and social rationality,” stated a spokesperson at Eneres.

Under the current FIT scheme, Misawa Home has developed a total 3.6 MW of PV capacity on its properties and another 3.6 MW is under construction.  Its PR manager stated that the company will procure 3 MW worth of solar electricity capacity from 300 home or apartment owners by 2016. Combined with its own 7.2 MW, the company will be able to secure 10 MW worth of green energy capacity to sell by the full deregulation.

Leopalace21 Corporation, whose primary businesses include construction, leasing, and sales of apartments, condominiums, and residential housing, is also expanding into a retail electricity business. By July 2014, it developed over 10,000 apartments with solar systems, equivalent to 136 MW of capacity. The company would like to sell electricity to renters who reside in the 550,000 rooms it has nationwide upon the deregulation.

In June, the company created its PPS unit called Leopalace Energy. The business model is the same as a solar PPA provider, except Leopalace Energy is treated as a utility.  It plans to rent roof space from its apartment and condominium owners, install solar systems and then sell electricity in the retail market, preferably for its renters and tenants.

The Japanese Consumer Co-operative, known as Co-op, supplies foods and other daily necessities through store operation and home delivery service to its members nationwide. The Co-op is creating a PPS operation unit called Earth Club to create a sustainable society and reduce the nation’s reliance on nuclear power. It will deliver electricity from seven rooftop solar systems (total of 4 MW) that it developed under the FIT policy. The Co-op will procure electricity from biomass generators to create a stable electricity mix for its customers.

Some green retailers such as the Japanese Consumer Co-operative are even offering to purchase solar-generated electricity at a rate higher than the FIT rate and selling electricity at a rate that is competitive with the traditional utilities. The reason they can do this stems from the current FIT mechanism in Japan.

The Japanese government launched the much-anticipated FIT program on July 1, 2012, with premium rates designed to accelerate the large-scale, non-residential PV segment.  The FIT program is financed through mandatory charges (surcharges) for all retail electricity customers based on their electricity usage. The surcharge collected by utilities from ratepayers nationwide is gathered by the Procurement Price Calculation Committee, appointed by the Ministry of Economy, Trade, and Industry (METI). 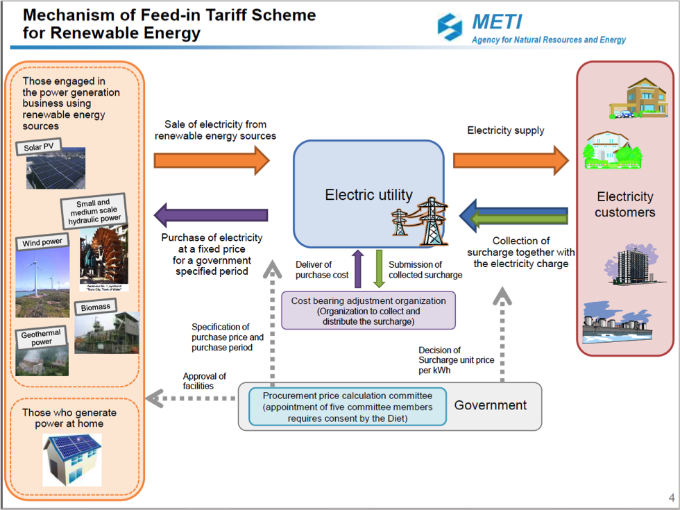 The Committee determines the specifics of the FIT and surcharges on an annual basis. It also calculates the avoided cost — the cost the utility would incur if it were to generate or purchase power from another source.

The Committee provides the utilities with grants, which cover the difference between the surcharge and the avoided cost. The utilities receive the grants monthly, as recovery costs of purchasing renewable electricity, so that the utilities will not get into financial difficulties in connection with the FIT payment.

These grants will be an important factor, ensuring that the new green retail marketers can be competitive. The Japanese Consumer Co-operative illustrates this mechanism as follows: a PPS will purchase electricity from a FIT-contracted PV system owner at ¥40/kWh (US $0.39/kWh). This PPS then re-sells electricity at ¥20/kWh (US $0.20/kWh) at half of the purchase cost. It can still make some profit because of the “grant — the government reimbursement,” which can cover about 70 percent of the original purchase cost.

According to the METI, the avoided cost for non-IOU electricity providers from this July was ¥10.53/kWh (US $0.10/kWh). PV systems that locked in the FIT rate between April 1, 2012 and March 31, 2013 are guaranteed to receive a rate of ¥40/kWh (US $.39/kWh) for 20 years. The difference between these two rates are redistributed to electricity retailers as a grant on every kWh sold or re-sold in the retail electricity market.

There is less than two years before the full deregulation in Japan will be implemented.  Green PPSs may not be sustainable when the avoided cost becomes very high because the overall grant amount will be reduced, thereby reducing profits. The rise of the avoided cost also means the rise of overall electricity bills, which will hurt end users. It will be a big challenge for Japan to work on the further details to provide choices for consumers and bring competition to the industry while minimizing cost burden on ratepayers.