The courage shown by the new UK coalition government in looking hard economic times square in the eye and taking on the austerity measures needed is winning praise around the world and across the political spectrum.

For the energy sector, this comes as no surprise. The British have long demonstrated these paired traits of realism and the determination to act. They met the opportunity of North Sea oil with traditional British sea-going dynamism. As those oil supplies began to peak, they began making nuclear plans. As the danger and unaffordability of nuclear power became undeniable, courageous British leaders once again chose to go down to the sea, to develop the UK’s immense offshore wind and ocean wave and tidal energies.

In response to initial commitments from the UK government to fund British offshore wind infrastructure expansion, some of the biggest turbine manufacturers in the world (Siemens, Clipper, Mitsubishi, GE) have commited to a presence. At the end of 2009, the UK had almost 900 megawatts of installed offshore capacity.

UK Offshore Wind: Building an Industry; Analysis and scenarios for industrial development is a detailed report on what Britain needs to unhesitatingly but methodically advance its offshore industries and bring more major private sector investment into the country. It provides specifics on siting factories and preparing ports, how much that will cost and what the economic benefits will be from the investment.

The core insight offered in the study is that an industry’s way forward can be successful or fail according to the infrastructure planning and preparation that preceeds expansion. ::continue:: 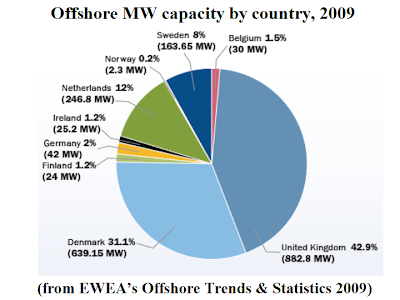 The study calls on the coalition government to commit the 60 million pounds set aside to prepare port infrastructure and take the lead in building new manufacturing capacity to prepare the nation not only to build its own New Energy capacity but to take a dominant role in the EU market as well. The report concludes that methodical, effective investment will lead to a stable offshore wind industry that will create 45,000 new British manufacturing jobs. It predicts that either (a) allowing offshore wind to grow too fast or (b) failing to plan and invest will result in the same “missed opportunity.”

Meanwhile, the Obama administration – which took office promising to facilitate the development of U.S. ocean energy assets – is now bogged down in the complexities created by BP’s misrepresentations and the clamor for stronger offshore regulatory protections. The best it has managed in streamlining the 7-to-10 year siting and permitting challenges to ocean energy development are announcements of memoranda of understanding (MOUs) between the Department of the Interior (DOI) and the Department of Energy (DOE) and between DOI, DOE and the Army Corps of Engineers.

In other words, while the UK is working out the details of turning its ocean energy potential into industrial power, the U.S. is working on getting government agencies to communicate more effectively.

Talk about a missed opportunity… 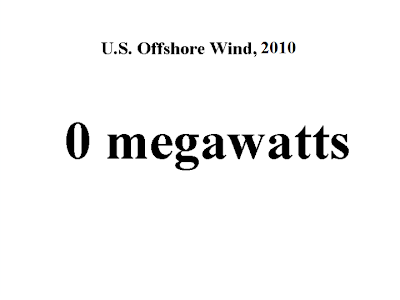