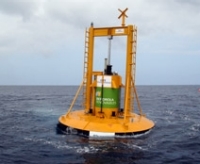 The system will be installed off the Oregon coast near Reedsport, and it will represent the first phase of an expected 10-PowerBuoy Reedsport wave power station with a generating capacity of about 1.5 MW.

Nine additional PowerBuoys will be constructed and installed under the second phase of the project.

Ocean Power Technologies and Oregon Iron Works estimate that construction of the first PowerBuoy PB150 wave energy device, rated at 150 KW, will create or sustain about 30 jobs over the next nine months.

“Our workers are helping the Pacific Northwest become the center of excellence in green tech/clean tech manufacturing, and we are proud to continue that tradition of leadership in American manufacturing by building the world’s best renewable ocean energy devices for OPT,” said Terry Aarnio, chairman of Oregon Iron Works.

The Oregon coast, Draper said, is “One of the world’s top sources for future wave energy development.”

Ocean Power Technologies plans to complete its first PB150 wave energy device in the UK for deployment in Scotland in mid 2010.

Ocean Power Technologies recently received an A$66.5 million (US$61 million) grant from the Australian government to build a 19-MW wave power project off the coast of Victoria, Australia (HydroWorld 12/4/09)