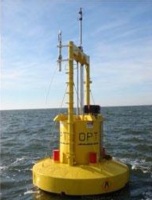 New Jersey, United States Marine hydro firm Ocean Power Technologies Inc. announced that it has expanded its relationship with Mitsui Engineering & Shipbuilding Co. Ltd. with the signing of a new contract to develop OPT’s PowerBuoy technology for its application in Japanese sea conditions.

This builds on the company’s MOU, signed in October 2009, with Mitsui, Idemitsu Kosan Co. and Japan Wind Development Co. for the development of wave energy in Japan. The consortium have since worked with the Japanese government to increase recognition of wave power in Japanese energy policy – which intends to boost renewable energy sources to 10 percent of primary energy supply by 2020.

Under this new contract, the two companies will work together to develop a new mooring system for OPT’s PowerBuoy, customized for wave power stations off the coast of Japan. The new system will undergo testing at MES’s wave tank facilities to verify the results of extensive computer modeling. OPT expects to receive 18 million yen (approximately US$220,000) for its development efforts.