As the marine and hydrokinetic energy industry expands, new innovations in environmental monitoring and turbine design are necessary to keep it moving. Verdant Power’s RITE project is on track to improve the ability to monitor environmental impact in tidal settings.

The Roosevelt Island Tidal Energy (RITE) project has operated in New York City’s East River since 2002, with multiple turbines in place for demonstration purposes from 2006 to 2008. Before that deployment and during the intervening years, technology owner and project developer Verdant Power has performed significant environmental monitoring work to ensure the units would not cause negative impacts to the environment, such as fish injury or noise pollution.

Based on this environmental monitoring data, Verdant Power received a pilot operating license from the Federal Energy Regulatory Commission to expand the RITE project to an array of up to 30 turbines with a total generating capacity of 1 MW. In addition to generating clean energy, a key aspect of the expanded RITE project will be for Verdant Power to gauge any environmental effects from a larger turbine array.

Marine and hydrokinetic (MHK) energy is among the fastest-growing sectors in the renewable energy industry, with opportunities to make major contributions to the carbon-free generation of electricity worldwide. MHK energy is derived from free-flowing currents of oceans, rivers and manmade waterways without dams or impoundments.

On January 23, 2012, under licensing procedures developed specifically for MHK pilot projects, FERC issued its first hydrokinetic pilot project license to the RITE project. This license has a term of 10 years.

FERC developed the pilot license process in 2008 to allow developers to test new hydrokinetic technologies, determine appropriate sites for such technologies and confirm the technologies’ environmental effects without compromising FERC oversight. Pilot projects must be small, short-term, in an environmentally non-sensitive area, able to shut down on short notice, and be removed (with the site restored) before the license expires (unless a new license is issued).

Under this FERC pilot project license, and in coordination with New York State water quality certifications and other authorizations, the RITE project will be built out in a phased approach to include up to 30 turbines installed on triframe mounts (supporting three turbines each), with a total capacity of up to 1 MW. At its full capacity, the project is to have annual generation of 2.4 GWh.

The East River is a tidal strait, with strong water currents that change direction between flood and ebb tides about four times each day (with periods of little or no flow between tides, called “slack tide”). The river’s flood and ebb currents have similar current velocity profiles, of up to 2.7 meters per second. These fast and regular currents, combined with a location directly offshore from a major metropolitan area, make the East River an ideal site for tidal power generation (see Figure 2).

The East River is a habitat for resident and migrating wildlife. The river supports a variety of aquatic species, including winter flounder, Atlantic tomcod, striped bass, bay anchovy and American eel. The two relatively common fish species are Atlantic silverside and northern pipefish. A variety of birds also inhabit the area, with some using the East River for feeding and resting. Dominant species are the double-crested cormorant and a variety of gulls.

The area also provides habitat to two federally-listed endangered fish species – short nose sturgeon and Atlantic sturgeon. Although the biological assessment for the RITE project rated the probability for interaction with these species to be low, as part of its monitoring plans, Verdant will continue to observe and report any interaction between these species and the project during operation.

Since 2002, and through the support of entities such as the New York State Energy Research and Development Authority (NYSERDA) and the city of New York, the RITE project site has served as the primary venue for Verdant’s research, development and demonstration of its technology – the Kinetic Hydropower System (KHPS). The KHPS is a water-to-wire system that consists of three main components:

Composite rotor (5m at RITE) with 3-fixed blades that rotate at the relatively slow and constant speed of approximately 40 RPM, with tip-speeds of 35 feet per second (see Figure 1). This is well below normal water vessel propeller speeds and conventional hydropower turbine blade speeds.

Sealed nacelle, pylon and passive yaw mechanism that is hydro dynamically designed to allow the turbine to self-rotate into the prevailing current (like a weathervane) so that the blades are optimally aligned to generate energy.

Custom-designed drivetrain unit (with induction generator) enclosed within the nacelle that integrates the bearing housing with a special long-life planetary gearbox, with mechanical shaft seals and a minimum of sealed lubricants.

Streambed mounting system that can vary depending on site conditions as a single drilled monopile or a gravity-based triframe mount that supports three turbines (to be used for the RITE project). 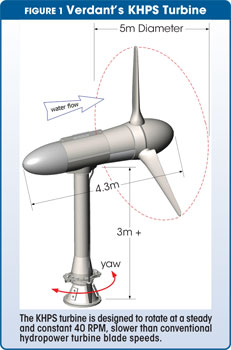 Appurtenant facilities for navigation safety – such as private aid to navigation (PATON) buoys and lighted warning signs, as well as instrumentation including ADCPs (acoustic Doppler current profilers) from Teledeyne RDI in Poway, Calif., which record water velocity, and environmental monitoring systems as described below.

As part of the FERC license, and working with natural resource agencies and project partner Kleinschmidt Associates, Verdant Power is executing a comprehensive set of environmental monitoring plans throughout the phased development of the RITE project. The goal of this monitoring is to observe the operating KHPS turbines and the interaction of aquatic species with the natural environment, particularly as the project grows to include larger arrays of operating turbines.

These plans are extensions of monitoring efforts conducted during demonstrations of the KHPS, which showed no evidence of negative impact to the East River environment. Environmental monitoring data collected from 2006-09 has demonstrated that fish avoid zones of potential impact with the KHPS and instead populate inshore zones. In addition, the slow rotating speed of the turbines (40 rpm), lack of ducted pinch points, and ample opportunity for fish movement within the turbine array indicates minimal opportunity for harm. During demonstrations of the KHPS, there has been no observed evidence of increased fish mortality or injury, nor has any increased bird activity (which could signal fish interaction) been observed.

The RITE monitoring of environmental effects (RMEE) plans represent a multi-year US$2.3 million dollar program to be conducted throughout the staged expansion of the RITE project, with appropriate reporting and decision points at each stage in an adaptive management protocol. This set of plans has been developed in consultation with federal and state agencies including the New York State Department of Environmental Conservation, NOAA’s National Marine Fisheries Service, the US Fish and Wildlife Service, the US Environmental Protection Agency, and the New York State Department of State, among others.

Micro Scale: In and around an individual turbine rotating at less than 40 revolutions per minute and only during high velocity periods, greater than 1 meter per second. For this turbine, 1 diameter (D) equals 5 meters. At this scale, resident and migratory fish interactions, as well as micro hydrodynamics, are being studied.

Meso Scale: In front and back of the turbine triframe, where the reaction around a triframe of three turbines is being studied, as well as the interdependencies and recovery distance to the next triframe in the array, generally 12D to 20D in distance.

Macro Scale: Well beyond the triframe (and the fully developed array), extending to points where organisms first sense/encounter the minor hydrodynamic presence of the KHPS array. This is a broader-scale study conducted for longer-term deployments.

This terminology is similar to other MHK industry practitioners that use ‘near-field’ and ‘far-field’ as reference points. However, adding the within-array region (i.e., meso scale) is also relevant, especially as the broader industry moves towards arrayed installations. 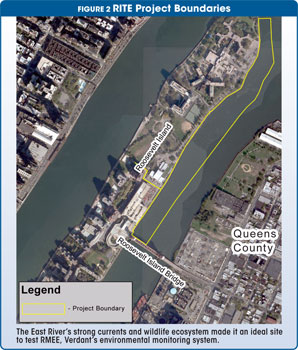 The following is an overview of the RMEE plans

RMEE 1 – Seasonal Fixed Hydroacoustic Monitoring: Fixed hydroacoustic transducers will be used at later stages of the RITE project when multiple (more than six) turbines are operating, in order to monitor seasonal fish presence and abundance at the meso scale. The plan anticipates the use of BioSonics hydroacoustic transducers intended to monitor fish targets swimming in and around the turbine array, providing data on fish numbers, general target size (large and small), location in the water column and location laterally across the tidal array.

RMEE 2 – Seasonal DIDSON Observation Monitoring: The dual-frequency identification sonar (DIDSON) provided by Sound Metrics in Bellevue, Wash. is a multi-element sonar unit that provides video-like images of underwater objects. Verdant has devised a proprietary mounting system to observe the operating KHPS turbines with the goal of this monitoring to provide imaging of any fish/turbine interaction, both spatial and temporal, at the micro scale.

RMEE 3 – Seasonal Species Characterization – Netting: Netting will provide species characterization at the macro scale during seasonal times of fish abundance, to support the historical data on species and observations during hydroacoustic monitoring (RMEE 1 and 2). Aquatic scientists from Kleinschmidt Associates will support the execution of this study plan.

RMEE 4 – Tagged Species Detection: This plan is intended to provide information to support the biological assessment of ESA species via detection of species tagged through the Atlantic Cooperative Telemetry (ACT) network. The ACT network represents over 65 researchers actively focused on monitoring various fish and invertebrate species in the Eastern U.S., from Maine to Florida. The network represents over 5,000 transmitters deployed, corresponding to 49 identified species along the east coast. In 2011 Verdant installed three VEMCO (Halifax, Nova Scotia) receivers near the RITE site.

Results from this effort will help assess assumptions regarding the potential presence and abundance of the Atlantic and short nose sturgeon, along with other acoustically-tagged fish such as striped bass, bluefish and winter flounder. Monitoring is done in both the East Channel of the East River proximate to the RITE project boundary, as well as the West Channel of the river, and provides unique data to support macro analytics.

RMEE 5 – Seasonal Bird Observation: Observing bird presence and activity near the RITE project boundary provides data on the potential effects of the operating KHPS on diving bird populations, particularly through the migrating season. This monitoring may also provide additional insights regarding any meso-scale effects of multiple MHK turbines operating in an array configuration, as increased bird activity in and around the array could indicate increased presence, attraction, predator/prey relationships, or the unlikely effects of injury or mortality of fish.

RMEE 6 – Underwater Noise Monitoring and Evaluation: Underwater noise, both ambient and incremental, as generated from the operating KHPS turbines was studied during the preliminary technology demonstration. This monitoring plan further analyzes the potential noise signature from multiple operating KHPS turbines in an array configuration and the potential, if any, effect on aquatic resources or change in movement and migration patterns at the meso scale within the array. The instrumentation protocol is still under development.

Beyond providing another generation site for MHK energy, the experience and knowledge gained from the RITE project can have a considerable impact on environmental monitoring methodology. This is also a key cornerstone of the Ocean Renewable Energy Coalition MHK Roadmap – the development and application of environmental monitoring tools and analysis of operating MHK technologies.

In these ways, the further operation and monitoring of systems at the RITE project represents an opportunity not only to contribute to New York’s clean energy infrastructure but also to broaden the understanding and implementation of MHK systems in the U.S. and globally.