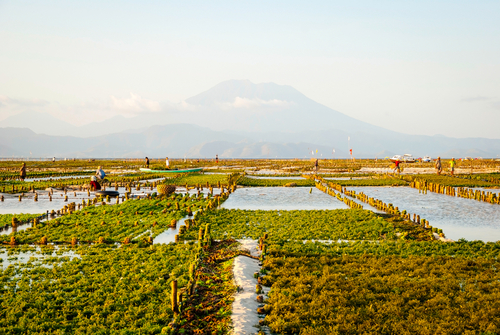 In Washington, the Obama Administration’s Clean Power Plan has been hailed by the Algae Biomass Organization and other sections of the advanced bioeconomy as a “huge win for algae” with its OK for carbon capture and use technologies.

The Clean Power Plan sets federal guidelines for states to follow in order to cut carbon emissions by 32 percent before 2030. According to the EPA, CO2 alone is responsible for 84 percent of the greenhouse gas problem. More than a third of that comes straight from existing power plants.

The Plan is a final rule from the EPA, capping a years-long effort by the Obama Administration to regulate carbon dioxide as a pollutant under the Clean Air Act, after efforts to pass legislation for cap-and-trade failed in the Congress during Obama’s first term. Along the way, the U.S. Supreme Court confirmed the Administration’s right to regulate CO2 as a pollutant.

A signature feature of the plan is having individual state-level plans that manage remediation plans for the obligated emitters in their respective jurisdictions.

As Assist For Algae

The rule further notes, “state plans may allow affected EGU’s to use qualifying CCU technologies to reduce CO2 emission,” and “emission goals would require a better understanding of the ultimate fate of the captured CO2 and the degree to which the method permanently isolates the captured CO2 or displaces other CO2 emission from the atmosphere.”

According to Algenol, the #3-ranked company in the Advanced Bioeconomy, “just $2 worth of CO2 can make seven barrels of fuel.” Accordingly, carbon capture and use (known collectively as CCU technology) is a carbon remediation strategy critical to virtually every company using microalgae or cyanobacteria to convert CO2 plus water into a range of fuels, chemicals, protein, fertilizer, omega-3 nutraceuticals, cosmetics, biomaterials or other bioeconomy products — making it possible for algae companies and others to obtain CO2 from power plants as part of an overall greenhouse gas reduction program by the obligated parties.

“Potential alternatives to sequestering CO2 in geologic formations are emerging. These relatively new potential alternatives may offer the opportunity to offset the cost of CO2 capture… these technologies not only show promise, but could potentially be demonstrated to show permanent storage of CO2. In the January 2014 proposal, the EPA noted that it would need to adopt a mechanism to evaluate these alternative technologies before any could be used in lieu of geologic sequestration. 79 FR at 1484. The EPA is establishing such a mechanism in this final rule. See §60.5555(g). The rule provides for a case-by-case adjudication by the EPA of applications seeking to demonstrate to the EPA that a non-geologic sequestration technology would result in permanent confinement of captured CO2 from an affected EGU.

U.S. President Barack Obama unveiled his 1300-page Clean Power Plan, focused on limiting greenhouse gas emissions from power plants — essentially, shifting broadly to renewables such as wind and solar, while maintaining the use of natural gas.

President Obama called it ”the biggest, most important step we have ever taken” on greenhouse gas emissions and climate change. I’m convinced no challenge provides a greater threat to the future of the planet. There is such a thing as being too late. If we don’t do it nobody will. America leads the way forward. This is our moment to get something right and get something right for our kids”.

“This is a huge win for the algae industry,” said Matt Carr, executive director of the Algae Biomass Organization, “and one we have been working towards for more than a year. The rule gives new certainty to a number of companies across the nation that are commercializing algae-based technologies that convert carbon dioxide generated at power plants into fuels, feeds, fertilizers and other valuable products. Carbon utilization will reduce the cost of emissions reduction for utilities and ratepayers, and in some cases create a new revenue stream. This common-sense, market-driven approach has bi-partisan support throughout Congress and its growing importance is reflected by several bills in the House and Senate that direct federal agencies to increase funding for carbon utilization.

Algenol CEO Paul Woods also hailed the move. “My hope was to move towards an inclusion of carbon utilization with this final rule. Here, they went farther, they specifically named algae.”

What went right for algae here, why the big win?

“We are the one part of the clean power rule that wasn’t controversial, said Woods. “Carbon utilization is taking advantage of American high tech, and is not a burden on electric customers because we pay for the CO2 we use. So we had bipartisan support for this provision. Now, the utilities have a portfolio of options, and in our case what’s different about Algenol is that we have the approved EPA pathway. This allows for affordable electricity and clean power, both. We want to buy from the electric company, and see that money flow to the customers.

“That is key. If we want a green economy, we have to have low-cost solutions,” Woods added.

What’s next for algae, we asked Woods, in terms of the final steps before commercial-scale algae renewable fuels can be built in the U.S.?

“Two things would help. Having Master Limited Partnerships opened up to renewable fuels, not just fossil fuels. That would help every company commercializing renewable fuels. Also, renewal of the Production Tax Credit for more than one year, a whole lot more. These one-year retroactive credits don’t help with project finance, the most important thing is to make it certain, and by establishing this in advance it’s no different than doing it retroactively, in terms of the tax impact. But it would make a huge impact for projects.

Former Secretary of State Hillary Clinton said, “I’d defend it. It will need defending. Because Republican doubters and defeatists – including every Republican candidate for president – won’t offer any credible solution. The truth is, they don’t want one.”

This article was originally posted on Biofuels Digest and was reprinted with permission.