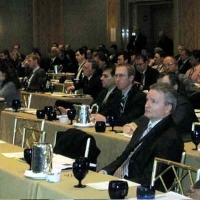 New York, United States [RenewableEnergyWorld.com] The United States is the largest producer of geothermal energy in the world, but one theme cropping up across sectors of the industry is simply that more needs to be done. Upfront costs tend to be high, but support from federal agencies combined with a marked rise in development in recent years renders a situation increasingly appealing for investors interested in payoffs from this trusted baseload renewable energy resource.

Despite the recession, geothermal energy added 750 full time jobs and 2,827 construction-related jobs from roughly $800 million that was invested in the industry in 2009.

Against this backdrop, the GEA welcomed financiers, politicians and industry developers, including many faces brand new to the industry, to a finance forum complete with model case studies, discussion of federal policies, and a keynote address from Senator Harry Reid (D-Nev). “More than half the attendees were brand new to us,” said Kathy Kent, events and marketing manager for GEA. “That’s a lot of new faces.”

“Geothermal energy is gaining momentum in our country as a clean, economically feasible alternative to fossil fuels. And as we invest in geothermal resources, we will not only help to improve our environment, but also strengthen our economy and create jobs,” said Bloomberg in his proclamation.

He added, “As New York City pursues its sustainability goals, we’re grateful for organizations like the Geothermal Energy Association, which is dedicated to supporting companies that are developing geothermal resources and helping to expand the use of geothermal power.”

The mayor also stated that his administration “is working hard to attract companies that are interested in investing in clean energy — just one of the many steps we’re taking to make New York City a leader when it comes to mitigating the effects of climate change and protecting the environment for future generations.”  He concluded by offering his best wishes for the finance forum and the industry.

In Senate Majority Leader Harry Reid’s keynote address (left), he outlined areas for the industry’s political and financial partnerships to improve and declared his own commitment to geothermal energy and improvements on the energy front.

Reid noted potential for improvement in federal research and development, extending and expanding tax credits, transmission efforts, a needed national renewable electricity standard, lowering of oil consumption and the need for Congress to send the market a clear signal on the costs of global warming pollution.

“In my role as Majority Leader, I am committed to making the federal government a better partner, one that can help this industry continue to know the great success it has enjoyed over the last few years,” Reid said. “In my role as a Senator from Nevada — a state I like to call the Saudi Arabia of renewable energy — I am committed to realizing geothermal’s full potential.”

The senator’s state, Nevada, has about 450 megawatts of conventional geothermal power in production. “In the next three to five years — with the right mix of incentives and policy — my state alone could add 64 new projects that would bring that number up to nearly 2,500 megawatts,” he stated. “When you take into account the rest of the West, that number could easily double. That’s a lot of clean power. That’s a lot of jobs.”

Presentations on “Recent Models of Geothermal Success” provided examples of current developments that are underway from a variety of companies. “Federal Financial Incentives for Geothermal Development” speakers discussed impacts of the American Reinvestment and Recovery Act, the U.S. Treasury grant program and the U.S. Department of Energy Loan Guarantee program. Grant and tax subsidies have

time constraints so quick action is needed for developers to get the full benefits. And at the time of the event, four geothermal energy award winners had already received their ARRA funds.

In “Geothermal 201: Examining Key Issues for Investors” presenters covered areas of risk associated with geothermal development. This included discussion on the potential of the resource base, successes in drilling, associated costs and rates of return. The afternoon “Finance and Investment Dialogue,” explored the experience of panelists in geothermal energy investments. “Federal and State Legal and Regulatory Issues” tied together issues related to property and permitting, transmission connection and power purchase agreements.

Participants took home the insight of the geothermal industry’s top experts and experienced a celebration of the renewable energy resource.  A new report, available on GEA’s website and released at the event, highlights the geothermal industry’s growth and identifies up to $342 million of federal funding currently allocated to 132 geothermal research, development, and demonstration projects in 27 states.