The bubble has burst. The hype and euphoria of 2008 and 2009 is a distant memory. Fueled in part by the externality of the stimulus handouts from the stimulus package, and the (now fleeting) spike of natural gas and oil prices, cleantech has experienced its own mini dotcom era now followed by a dot bomb phase.

The politicization of Solyndra, the fracking revolution (that has dramatically increased U.S. fossil fuel reserves) and the realities of what it takes to build successful cleantech companies have all brought the cleantech venture capital space crashing back to earth. Available venture capital for cleantech companies has declined dramatically as some diversified funds pull out of making cleantech investments and cleantech-focused funds find it challenging to raise new capital. But this is not the beginning of the end for cleantech venture capital. Rather, it is the end of the beginning. While the cleantech hype has been fueled by a focus on global warming and the anticipation of government policies on carbon, the true underlying dynamics that will drive the explosion of clean technologies in a variety of sectors remain largely unchanged — the impending extraordinary growth in demand for commodities of all types.

In the 1960s, there was a widely held belief that world population growth would lead to the demise of the human race. In fact, based on the thinking of those experts, many of us should be dead by now. Back then, experts believed the world could not possibly supply the anticipated population with the necessary food for survival. But a wonderful thing occurred — the thing that separates humans from animals. The necessity of rapidly increased food supplies lead to the invention of disruptive advanced agricultural technologies. The result? In spite of population growth, today the world generates more food per capita than ever before.

It is that same type of dynamic that will be the true underlying driver behind cleantech innovation. Over the coming decade, the world will add about 1.5 billion people to the ranks of the middle class. That’s approximately a 75 percent increase from the number today. Such an increase will mean 1.5 billion more people who will buy cars, electronics, improved housing, higher protein foods, demand clean water and consume more energy. A Brookings Institute study estimated that this will yield a comparable increase in the world population’s overall consumption.

The authors of the doom and gloom books of the 60s would look at this and forecast extraordinary increases in the prices of all types of commodities, which would lead to global disruption and unrest. I do believe we will see increased volatility in a variety of commodity prices, but I also believe that this dynamic will drive innovation just like it did in agriculture. Rapid increases in demand for commodities, enormous markets and the ability for new technologies in certain segments to provide disruptive advantages will create an environment for compelling venture capital opportunities. 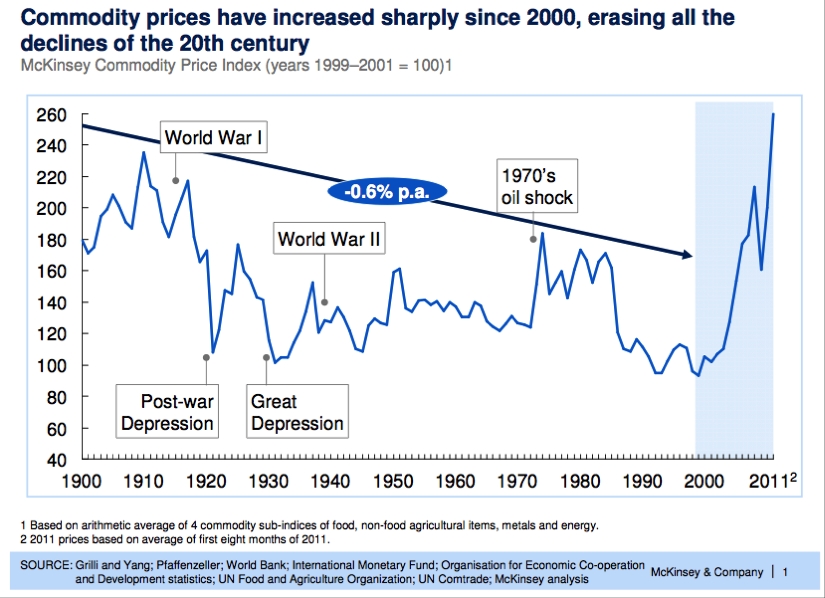 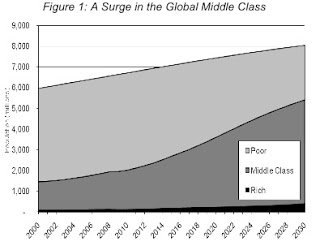 Many cleantech venture capitalists have focused on CO2 as the driving force for innovation. But I have always looked at cleantech as way to drive increased efficiency, reduce waste and create less expensive alternatives — the things that drive bottom line benefits in the free market. In other words, creating Gold by being Green (hence the name of my blog). The combination of the natural gas boom and the political reality of the unlikelihood of a price on CO2 emissions in the U.S. (or just about any nation that doesn’t already have one) has caused those with a CO2-focused investment thesis to face a very challenging environment.

If cleantech is viewed as synonymous with carbon emissions reductions, then the segment will be challenging from an investment perspective. But through the lens of GreenGold, where cleantech is about reducing the consumption of all sorts of non-renewable commodities, there will be many compelling investment opportunities yet to come. Undoubtedly the devil is in the details of which markets and areas of innovation will hold the best venture potential (ahh… fodder for a future post). But I believe that investors who run from anything remotely cleantech today will find themselves looking back and feeling like those who ran from investments in the Web in 2002. Now that the hype is gone we can focus on building real businesses. The next decade will be the one where real value is created in a number of segments of clean technologies and I, for one, plan to be making money by investing in some of those winners.

This article was originally published on GreenGold and was republished with permission.