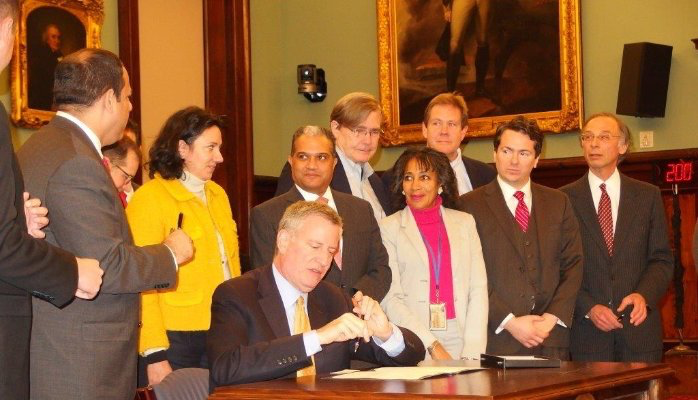 The devastation wreaked by Superstorm Sandy in 2012 has had a profound effect on New York City’s residents and elected officials. Since Sandy, the city has been aggressively working to reduce its carbon footprint.

On Dec. 7, 2015, the New York City Council passed the geothermal energy bill Int. 0609-A-2015. On Jan. 7, Mayor Bill de Blasio signed the local law to amend the administrative code of the City of New York, in relation to the use of geothermal energy in the city.

Sponsored by Council Member Costa G. Constantinides, the bill requires New York City to identify and implement geothermal heat pump installations in all new construction and retrofits to city-owned buildings when it is shown that doing so would be cost-effective.

New York Geothermal Energy Organization (NY-GEO) member Bob Wyman, who testified in favor of the bill, wrote “I believe this is the first time that any major city in the U.S. has adopted legislation requiring the use of the Social Cost of Carbon in making spending decisions.” The bill establishes this cost as starting at $128/metric ton (based on the high end of the federal government’s estimates) over a 20-year period.

Wyman also suggested that “it may also be the first time that a city has committed to evaluating geothermal heat pumps for all new construction and retrofits and using them when cost-effective.”

There are three requirements in the geothermal bill:

Part of the identification process would include comparisons of conventional heating and cooling technologies with geothermal heat pumps regarding:

The bill also calls for an office or agency designated by the mayor to develop an online, publicly available screening tool no later than Feb. 1, 2017. The screening tool will be used to determine whether an installation of a geothermal system may be cost-effective for a property.

Geothermal installations are not new in New York City, but this enthusiastic move forward is. The Brooklyn Botanical Gardens, The Bronx Zoo and the Statue of Liberty are all heated and cooled with geothermal heat pumps. And Cornell University’s planned NYC Tech Campus on Roosevelt Island will have a four-acre geothermal well field as part of its goal to be the largest net-zero energy building in the U.S. East Coast.

Those with vision and a determination to deal with climate change are showing us all the way.

This article was originally published by the New York Geothermal Energy Organization and was republished with permission.