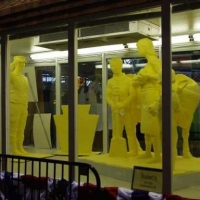 Pennsylvania and Nevada, United States [RenewableEnergyWorld.com] Last week the Pennsylvania Energy Resources Group reported on the highly anticipated unveiling of the Pennsylvania Farm Show butter sculpture. This year’s sculpture, which was revealed this past Saturday, is dedicated to the National Guard and depicts a Guardsman saying goodbye to his family. About 1000 pounds of butter, donated by Land O’Lakes, went into the sculpture, which will be converted to biodiesel by Lake Erie Biofuels at its biodiesel facility in Erie, Pennsylvania at the end of the show.

The company plans to provide the biodiesel to the Pennsylvania National Guard for use in its equipment in the state and overseas.

“We are pleased to help demonstrate the importance of Pennsylvania agriculture and its impact on all phases of our lives,” said Michael Noble, president of Lake Erie Biofuels. “Our farmers have always been stewards of the land, and have made our standard of living possible. Agriculture today provides not only for food, feed and fiber needs, but makes a significant contribution to our fuel needs through renewable products like biodiesel.”

Lake Erie Biofuels is the largest operating biodiesel refinery on the east coast, according to the company, with an annual capacity of 45 million gallons. The company has produced biodiesel used in cars, trucks, locomotives and most recently partnered with Greenflight to provide the aviation fuel for the first jet flight across the continental United States using biodiesel.

Lake Erie Biofuels has partnered with Penn State and Pennsylvania farmers in the state to expand the kinds of crops, including camelina and canola, available for the state’s farmers. These small oilseeds can be used to produce biodiesel, but are cover crops, helping the environment while providing revenue for farmers from land that might not otherwise be utilized. “The meal from these crops is used as animal feeds as well,” Noble noted, “helping keep costs down for our farmers and consumers.”

In related biodiesel news, Mark T. Sampson of the American Chemical Society explained in an announcement last week that researchers in Nevada believe waste coffee grounds can provide a cheap, abundant and environmentally friendly source of biodiesel fuel for powering cars and trucks.

In a new study, Mano Misra, Susanta Mohapatra, and Narasimharao Kondamudi note that the major barrier to wider use of biodiesel fuel is lack of a low-cost, high quality feedstock for producing that new energy source. Spent coffee grounds contain between 11 and 20 percent oil by weight. That’s about as much as traditional biodiesel feedstocks such as rapeseed, palm and soybean oil.

Growers produce more than 16 billion pounds of coffee around the world each year. The used or “spent” grounds remaining from production of espresso, cappuccino and plain old-fashioned cups of java often

wind up in the trash or find use as soil conditioner, said Sampson.

The scientists estimated, however, that spent coffee grounds can potentially add 340 million gallons of biodiesel to the world’s fuel supply.

To verify it, the scientists collected spent coffee grounds from a multinational coffeehouse chain and separated the oil. They then used an inexpensive process to convert 100 percent of the oil into biodiesel.

The resulting coffee-based fuel — which actually smells like java and can be seen in the image, right — had a major advantage in being more stable than traditional biodiesel due to coffee’s high antioxidant content, according to the researchers. Solids left over from the conversion can be converted to ethanol or used as compost, they noted in their report, which was recently published in the American Chemical Society’s (ACS) Journal of Agricultural and Food Chemistry.

The scientists estimate that the process could make a profit of more than US $8 million a year in the U.S. alone. They plan to develop a small pilot plant to produce and test the experimental fuel within the next six to eight months.

Biodiesel is a growing market. Estimates suggest that annual global production of biodiesel will hit the 3 billion gallon mark by 2010. The fuel can be made from soybean oil, palm oil, peanut oil and other vegetable oils; animal fat; and even cooking oil recycled from restaurants. Biodiesel can be added to regular diesel fuel or can be a stand-alone fuel, used by itself as an alternative fuel for diesel engines.