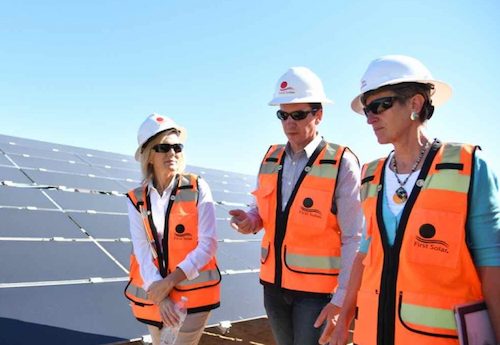 U.S. Secretary of the Interior Sally Jewell on Nov. 10 said that the Bureau of Land Management (BLM) has finalized a rule that creates a new competitive leasing process and incentives for solar and wind energy development on public lands.

“This new rule not only provides a strong foundation for the future of energy development on America’s public lands, but is an important and exciting milestone in our ongoing efforts to tap the vast solar and wind energy resources across the country,” Secretary Jewell said in a statement. “Through a landscape-level approach, we are facilitating responsible renewable energy development in the right places, creating jobs and cutting carbon pollution for the benefit of all Americans.”

The rule formalizes key aspects of the BLM’s existing Smart from the Start approach to renewable energy development. According to the U.S. Department of the Interior (DOI), the rule:

“The rule also refines the BLM’s approach to fair market value, to ensure that taxpayers get a fair return from these important resources,” Assistant Secretary for Land and Minerals Management Janice Schneider said.

DOI said that the rule refines the application review process and gives developers the option to lock in fixed rate adjustments and provide for MW capacity fee phase-ins.

The regulations will become effective 30 days after they are published in the Federal Register.