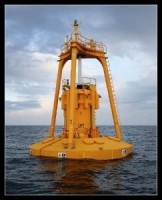 This 150-kW device was successfully deployed at sea on April 15, 2011, a press release states.

The ocean trials are being conducted at a site approximately 33 nautical miles from Invergordon, off Scotland’s northeast coast, and are expected to last up to three months.

A second PB150 is now under construction in the United States for an anticipated utility-scale project in Oregon, and the company is involved in other planned projects in North America, Australia, Japan and Europe that would utilize the PB150.