Announcements from the Obama administration of new financial support for the nuclear industry were met by declarations that the long-anticipated nuclear renaissance is finally at hand but the reality is quite different. There is a very real possibility that the President has just caught the nuclear industry in a trap of its own making.

In February 8’s ANOTHER NAIL IN NUCLEAR’S COFFIN, NewEnergyNews laid out the case (made in a recent paper, many papers before it, and many authorities over the last decade not the least of which is energy guru Amory Lovins) that there is a list of reasons why nuclear energy is simply not a wise choice for a smart society:

(1) new reactors are a decade in the planning, approvals, construction and testing process;

(2) new and upgraded facilities will at best offset the decommissioning of the many aging ones,

(3) the cost and financing of new reactors is “profoundly unfavourable and…getting worse,”

(4) federal subidies and emissions policies are not strong enough and are unlikely to become so with New Energy, Energy Efficiency and even natural gas as much safer and more economic choices,

(5) after 60 years, the nuclear energy industry has still not resolved the radioactive waste problem (because burying waste in a hole in the ground is a solution for animals, not humans), and

Though the President’s critics on the left do not recognize a strategic move in the loan guarantees to new nuclear, there is very likely method in what seems madness. The nuclear industry proved in the 1970s and 1980s, to those who were paying attention, that it is not viable. 50% of the projects that started in that “golden era” for the nuclear industry ran into economic difficulties and were not completed. ::continue:: 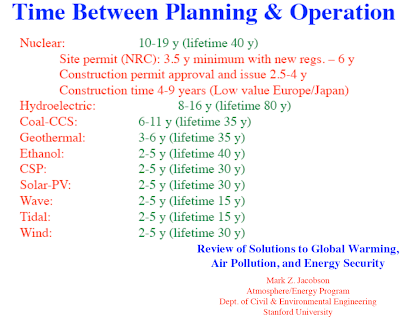 Contemporary conservatives, anxious to discredit the truth and accept the generous political support of the nuclear industry, choose to forget what a bad investment nuclear energy is. Insistent advocacy from Republicans and moderate Democrats has made it impossible for the Obama administration to move its agenda forward without allowing them to once prove nuclear energy’s non-viability.

A lot of taxpayer money could be lost but allowing the nuclear energy establishment to ruin itself is a bargain for every U.S. citizen at twice price. By the time it recovers from this round of failures to meet schedules, safety standards and price promises, there will be a New Energy infrastructure in place and the nation’s only green glow will not be radioactive but eternally renewable.

In Are New Types of Reactors Needed for the U.S. Nuclear Renaissance?; Ongoing problems with nuclear waste might resurrect plans for reactors that would leave less of it David Biello looks at what some believe is the only practical nuclear solution, a next generation of technology called fast-neutron reactors.

The present U.S. fleet of 104 nuclear reactors produces 2,000 metric tons per year of radioactive waste for which there is no safe disposal. The proposed dump at Yucca Mountain in Nevada was officially scrapped last month by the administration. Fast-neutron reactors wouuld consume much of their nuclear waste through fission.

On the other hand, like so many “solutions” to nuclear’s dilemmas, the next generation of technology remains unproven and brings with it a list of problems, from the fact that they don’t work to the fact that instead of waste they produce weapons grade plutonium. 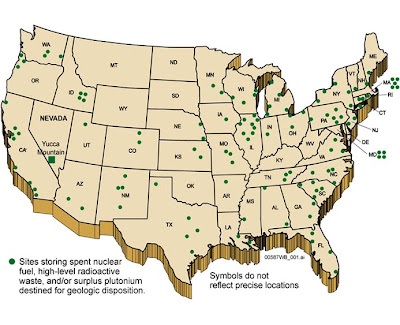 Letting radioactive waste pile up at plants all over the country is no better a solution than burying it like animals do in holes in the ground, (click to enlarge)

What is proven: Nuclear energy is an overly expensive and dangerous form of electricity generation. It produces radioactive waste for which the best disposal plan so far suggested is burying it in a hole in the ground, an instinctive animal response unworthy of a humanity capable of understanding the burden this leaves to future generations.

For the same money this experiment with nuclear energy is likely to cost the U.S. taxpayer, it would be possible to build an Energy Efficiency infrastructure that would return in energy savings $2-to-$4 for every dollar invested that could be used to build a New Energy economy based on emissions-free, ever-renewable, waste-free sun, wind, earth heat and flowing waters.

It is entirely likely that at least half of the proposed 6-to-8 reactors the Obama administration’s loan guarantees kick start this year will, by 2014 or 2015, come begging to financiers for more money and more time (just as the nuclear industry did for half the over-priced, behind schedule projects in the 1980s that never got completed). When that happens, the wind and geothermal industries will be in full production, the solar industry will be on the verge of grid parity and the water power industry will be building proven technology. What financial institution will choose to throw good money after bad? 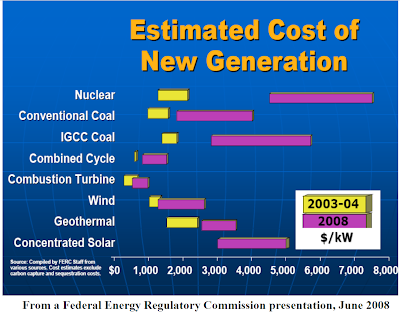 This post is based on DOE Delivers Its First, Long-Awaited Nuclear Loan Guarantee by Peter Behr (February 17, 2010, NY Times) and Are New Types of Reactors Needed for the U.S. Nuclear Renaissance?; Ongoing problems with nuclear waste might resurrect plans for reactors that would leave less of it by David Biello (February 19, 2010, Scientific American)