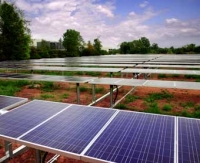 Lyndhurst, New Jersey [RenewableEnergyAccess.com] In yet another sign of New Jersey’s strong tilt toward the use and promotion of renewable energy, a prominent state agency intends to reveal plans next week for what could become the largest solar photovoltaic (PV) project on the Eastern seaboard and possibly the entire U.S.

The Board of the New Jersey Meadowlands Commission (NJMC) is expecting the final results of an NJMC staff report on April 10 that will address the viability of a proposal to establish a solar energy system in the Meadowlands. The two-tiered project would rely partly on the New Jersey Board of Public Utilities’ generous solar PV rebates to see the installation of an initial 5 megawatts (MW) of solar on Commission facilities and a proposed second expansion to 20 MW by the year 2020. The Meadowlands Commission is a state agency governing the Meadowlands area, which is located in Bergen and Hudson County encompassing 32 square miles or 19,730 acres. The area is one of the largest wetland complexes remaining in the Hackensack River Estuary ecosystem, an area whose proximity to urban centers in New Jersey and New York City has subjected the fragile area to heavy pollution in times past. Now, the area has been largely revitalized and is home to more than 265 species of birds — it is considered a major migratory fly-over and resting preserve. “When people think about New Jersey, especially this area, they think of landfills and stadiums, so this may come off as a little unexpected for a state agency to come out with a plan like this,” said Nancy Benecki, spokeswoman for the Commission. “But this is part of New Jersey turning itself around and making itself a major player in the environmental and renewable energy field.” Benecki said the Commission already has as much as 1.3 million square feet, largely on the rooftops of Commission buildings that are available for this first 5-MW tier. The space needed for the more ambitious expansion to 20 MW would come through agreements with the local towns, schools and businesses that could offer up unused roof-space for modules and parking lots for PV carports. The 20 MW goal, she says, is meant to complement New Jersey Governor Jon Corzine’s goal to have the state reach 20 percent renewable energy use by the year 2020. Benecki added the Commission would also look into adding other forms of renewable energy such as wind and tidal resources, and would also strongly consider incentives to lure renewable energy companies to locate within the area. More details are expected next week on April 10, when the Commission plans are unveiled at the Visitors Pavilion in the Meadowlands Environment Center, Two DeKorte Plaza, Lyndhurst, New Jersey. The next likely step will be in the release of a Request for Qualification (RFQ) to determine possible industry partners to help this large undertaking move forward.