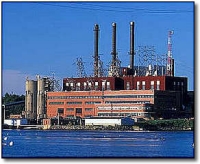 If granted final approval, a new energy project in New Hampshire will replace a large coal-fired power plant with a wood-fired unit, creating a market for the state’s low-grade wood waste, and contributing to cleaner electrical production.

Concord, New Hampshire – October 28, 2003 [SolarAccess.com] Public Service of New Hampshire (PSNH) filed plans to develop a power generating unit to be fueled by the burning of low grade wood. Called the “Northern Wood Power Project,” the filing with the NH Public Utilities Commission (NHPUC) seeks permission to replace an existing 50 MW coal-burning boiler at Schiller Station in Portsmouth with a new, high-efficiency boiler that burns wood. “This is a unique and significant initiative that can benefit New Hampshire’s environment and its economy,” said Gary Long, PSNH president and chief operating officer. “Once up and running, this project will result in significantly lower emissions at our Schiller plant, with no additional cost to our customers.” PSNH has proposed the installation of a wood-fired boiler capable of producing 50 MW of energy, enough electricity to power about 50,000 homes. The new, high efficiency boiler would replace an existing 50 MW- boiler, but at a much lower rate of emissions. PSNH estimates that the wood-fired boiler will result in a reduction of more than 380,000 tons of emissions annually. The cost of the project is estimated at US$70 million. In addition to the environmental benefits, the boiler will be fueled by locally-harvested wood — consuming whole tree chips, sawmill residue and other clean, low grade wood materials and wood byproducts from a state with numerous forest-related industries. “One of our primary motivations is to open up a new market for low grade wood in New Hampshire,” Long said. “We recognize that sustainable forestry and purchasing wood from New Hampshire forests is an important part of this project, and we will find ways to support that goal.” PSNH is in the process of determining what wood supply options are available and at what cost. Joseph C. Broyles, an Energy Program Manager with New Hampshire’s office of State Planning and Energy Programs said he had seen reports indicating that New Hampshire could produce, on a sustainable basis, about 1.4 million tons of low-grade wood per year. There is currently a good supply of the low-grade wood but an anemic market has left most of it unused. “Much of it has been going nowhere in recent years, staying in the forest unharvested,” Broyles said. “Closure of several of the wood-fired power plants in NH has reduced the market considerably. This is a concern, forest experts maintain, because markets for this wood increase the income from forest management operations, and this is important in supporting sustainable forestry practices, as well as jobs in the forest-based sector of the NH economy.” In its filing, PSNH seeks NHPUC approval in time to begin the design and construction process by November. The Northern Wood Power Project at Schiller Station is designed to be producing renewable energy by the end of 2005. PSNH chose Schiller Station in Portsmouth as the site of the Northern Wood Power Project for a number of reasons. The new boiler will be integrated into Schiller’s existing power generation system, which includes two other 50 MW coal-burning boilers. PSNH said that by taking advantage of the plant’s current infrastructure and staff, costs will be held down. The project will also benefit from Schiller Station’s physical location. The area’s transportation network, especially its access to area highways, is a critical asset to the success of the project. Long said the sale of the Renewable Energy Certificates (REC), or green tags, will pay for the estimated US$70 million investment that the project requires. While the purchasers of these RECs don’t necessarily tap into the power plant’s electricity, they do purchase the positive environmental attributes of the power plant. Both Massachusetts and Connecticut have viable markets for green power, and actually require that electricity suppliers in their states have renewable energy as part of their portfolio. Long said that the company’s goal is for its customers to have no increases in rates associated with the project. The project’s clean-burning boiler meets strict efficiency and environmental standards for the renewable energy programs in Massachusetts and Connecticut, said Long. Only new, low-emission renewable energy sources, such as the Northern Wood Power Project, can qualify, produce and sell RECs to suppliers seeking to satisfy renewable energy requirements. Most existing facilities would not qualify for the REC market. These emerging green markets, and the sale of RECs help establish increasing investments in other renewable energy such as solar, and wind power. The addition of 50 MW of power produced through the burning of wood will further diversify the mix of power that PSNH produces itself. On average, the company currently produces about 75 percent of the energy its customers typically consume, from its own coal, oil, natural gas and hydroelectric plants. “Utilities that are best positioned in the marketplace serve their customers with electricity generated by a diverse fuel mix,” said Long. “Adding wood to the PSNH fuel portfolio will help ensure the reliability of the supply of electrical energy and help keep the cost of that energy competitive.” PSNH also buys energy on the wholesale market, and is required to purchase power from dozens of New Hampshire-based independent power plants, including several wood-fired plants.