Figures lie and liars figure, goes the folk wisdom. And Mark Twain, that most penetrating among observers, famously observed that there are 3 kinds of liars: Liars, damned liars and statisticians. Still, some numbers are hard to argue with.

Clean Energy Leadership in the Rockies: Competitive Positioning in the Emerging Green Economy, from Headwater Economics, documents how the Rocky Mountain Energy Producers — Colorado, Montana, New Mexico, Utah, and Wyoming — are growing New Energy economies despite the recession. These states are leading the way in the development and implementation of policies that drive innovation in both New Energy and Energy Efficiency. As a result, they are showing growth in green jobs exceeding the growth in total employment and the national rate of green job growth.

Energy-oriented venture capital investment in the Rocky Mountain Energy Producers has grown more than 10 times over in the 21st century, reaching more than half-a-billion dollars in 2008. They also won U.S. Department of Energy funding of almost a billion dollars.

What’s the secret to such growth. The secret may be “it depends…” The Rocky Mountain Energy Producers’ policy approaches vary. Colorado has the second-most ambitious U.S. Renewable Electricity Standard (RES), mandate requiring the state’s utilities to obtain a specific portion of their power from New Energy sources by a date certain. Utah has only a New Energy goal with no mandated requirement. Wyoming has nothing. Incentives vary as much. The lesson: There are choices. The necessary factor: A commitment to New Energy. A commitment with smart policies that include compliance provisions is even better. ::continue:: 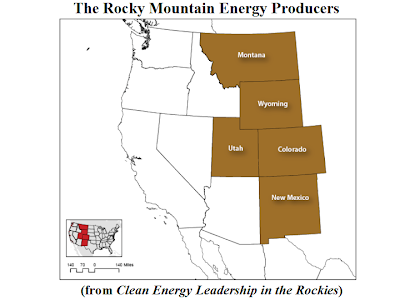 The cumulative impact from growing New Energy is more than riches. The Rocky Mountain Energy Producers, states rich in fossil fuels that are no strangers to energy production, are leading the transition to a New Energy economy. They are doing much more than merely generating emissions-free electricity. They are growing skilled workforces, building public and private research institutions, and winning supportive responses from state and local governments by demonstrating the benefits that come with the transition.

The study’s first section details the green economy in the 5 Rocky Mountain Energy Producers and the roles played by New Energy and Energy Efficiency.

Its second section documents the energy sources in the 5 states, including the role of New Energy in their mixes. It then analyzes the impacts of public policy and market forces on New Energy capacities and examines the strategies the 5 states are using to increase capacities.

The third section calculates an Energy Intensity (economic output per unit of energy consumed) for each of the 5 states and how Energy Efficiency increases economic growth by reducing the financial resources expended on energy, thereby freeing them for investment in the broader economy.

The study ends with a summary of the incentives, policies, and conditions that work. 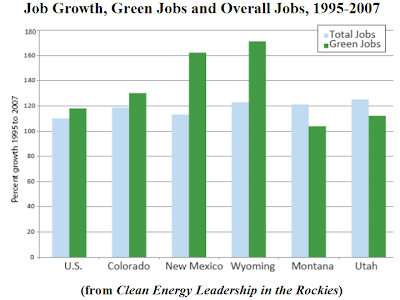 This post is based on Clean Energy Leadership in the Rockies: Competitive Positioning in the Emerging Green Economy (June 2010, Headwater Economics)