With U.S. energy and climate legislation now apparently trapped in a web of politics, xenophobia and Old Energy interests, New Energy developers and manufacturers around the rest of the world are likely rubbing their hands with glee and gearing up for action.

Nevermind, there is only $10 trillion at stake. That’s how much the world’s asset owners have invested in the fight against global climate change.

The news about the growth of the New Energy economy internationally is actually good. Most governments around the world are doing everything they can to back that $10 trillion bet with smart policies, legislation and regulation that make the most of the money. Investors with the biggest money are making the biggest investments.

Somehow, the conservative side of the U.S. Congress hasn’t figured out how such smart policies mean better energy security, economic rejuvenation and green gigajobs. Senator Lindsey Graham (R-SC), the one conservative that did, has reportedly thrown up his hands in frustration and taken his bipartisanship home.

The Green Economy: The Race is On, from Deutsche Bank Climate Change Advisors (DBCCA), describes the budding New Energy economy around the world, the many insights about effective policy that are emerging and how quickly the U.S. is falling far behind the countries that are taking the initiative. It follows on two previous DBCCA reports that describe in detail the most effective polices (see LOOKING FOR THE BIGGEST NEW ENERGY BANG FOR THE BUCK) and where in the climate change fight the smart money is going (see THE BEST BETS ARE ON THINGS THAT BEAT CLIMATE CHANGE).

All 3 reports emphasize the need for U.S. leaders to find their way to the right policies that will drive the flourishing of a U.S. New Energy economy. The key to the design of those policies is a 3-letter strategy: TLC. ::continue::

Legislation and regulation will vary from country to country. What works in a command-and-control economy like China may be almost impossible to implement in a contentious free market economy. What works in a wind-rich place like Denmark may be anathema in a sun-drenched place like North Africa. But every economy with any resources will benefit from policies that maximize TLC: Transparency, Longevity and Certainty. The big and smart money follows policies with TLC. 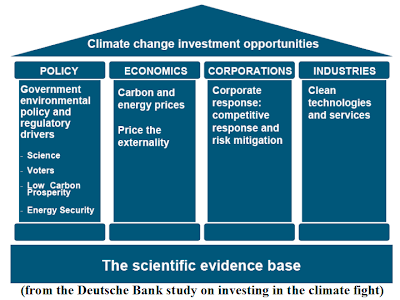 The new DBCCA paper re-emphasizes that (1) business has and will support climate change-fighting New Energy and Energy Efficiency technologies, products and services, (2) countries around the world are continuing to evolve policies that are accelerating the development of those technologies, products and services; and (3) because the U.S. is not applying the best policies, its New Energy economy is losing investors and its New Energy capacity is falling behind.

Washington’s attention at this moment is largely focused on what, for good reason, is now being called Wall Street reform. The environmentally-oriented left is dissatisfied with the compromise energy and climate legislation because it is too soft. The fossil fools and pro-nuclear radioactivists on the right contend the compromise energy and climate legislation does not provide enough for the same Old Energy.

It seems very like the darkest hours of the fight for health insurance reform. The administration’s goals seem to be slipping away. Only this time it appears the politics of the situation dictate not pressing forward. Better support for the New Energies – with (1) a national Renewable Electricity Standard (RES) requiring all U.S. regulated utilities to obtain a portion of their power from New Energy sources by a specified year and (2) the beginning of a price on greenhouse gas emissions (GhGs) – seems all but unachievable.

Anybody really set one of those Green jobs that looked so within reach in January 2008 should probably be thinking about getting their passport in order and applying for a Chinese visa.

But that IS how it seemed in the darkest hours of the fight for health insurance reform. 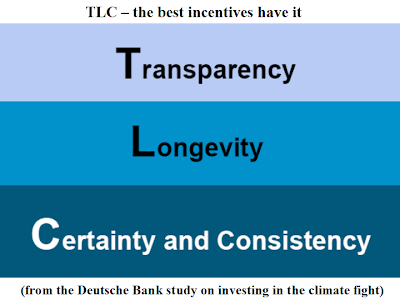 This post is based on The Green Economy: The Race is On (April 22, 2010, Deutsche Bank Climate Change Advisors)