Sometimes a simple statement of the facts conveys more than even NewEnergyNews’ eloquent and passionate argumentations and advocacies.

Case in point: A few selected facts about where New Energy and Energy Efficiency were at the end of 2009 in Renewables 2010 Global Status Report, from the Renewable Energy Policy Network for the 21st Century (REN21), are remarkably telling.

Fact: Grid-connected solar photovoltaic (PV) installed capacity has increased 60% per year (on average) for a decade and there is now 100 times more solar PV than there was in the year 2000.

Fact: It is expected that more of the new electricity generation capacity the world community installs will be sourced in New Energy than in Old Energy by late 2010 or 2011.

Fact: In 2009, for the first time, more private sector investment in New Energy and Energy Efficiency came from Asia/Oceania ($40.8 billion) than from the Americas ($32.3 billion).

Fact: By early 2010, the number of nations in the world community with New Energy and Energy Efficiency policies had almost doubled since 2005, from 55 to over 100, and ~50% are in developing nations.

The REN21 reports have been coming out annually since 2005. There is little question that someday historians can refer to them as documentation of the world’s transition to New Energy and, because it is a truism that history is written by the winners, it is looking very much like those historians will be Asian. ::continue:: 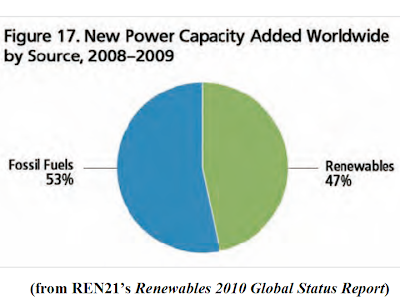 NewEnergyNews congratulates the Obama administration for its latest political victory: It has successfully shifted the debate about the November election. Now, instead of the opposition capturing headlines for gaining Congressional seats, Democrats will win those headlines – no matter how many seats they lose – if they retain majorities in the Senate and House.

For New Energy advocates, this is a hugely important political victory because now Senate Democrats can move ahead with the urgently-needed energy bill containing a Renewable Electricity Standard (RES) and vital financial incentives. Maybe Democrats will even feel well-positioned enough to work some (compromised) measure limiting greenhouse gas emissions into the legislation. 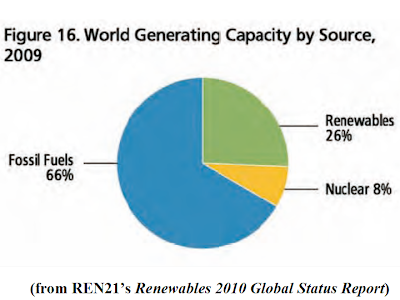