The Tea Partiers are a pain to some but they are making all that noise for a reason.

A successful 1950s movie director used to say he thought about film critics as patients and himself as the doctor. They were telling him they had a pain (in the movie) and his job was to diagnose. He said they often were wrong about the cause of the pain because they weren’t doctors trained in diagnosis.

The Tea Partiers have a pain. Like anybody in pain, they need a doctor to diagnose the problem though, like many in pain, they believe they know the cause of the pain. Reasonable analysis suggests their pain deserves attention but their diagnosis is ill informed. A more studied diagnosis, from among the most likely differentials, is that short term thinking has led to unhealthful practices and made the nation ill. The treatment plan is a long term commitment to healthful habits (in financial matters, in health insurance matters and in energy and environment matters).

The important question: What will get decision-makers to commit to the smart, long term plans everybody knows are the healthiest choices? For instance, U.S. energy policy is a lot like a diabetic patient with a sweet-tooth. What will inspire the patient to put down the Godiva truffles and get on the treadmill?

A zero-carbon European power system in 2050: proposals for a policy package, from the Energy Research Center of the Netherlands, is a long term plan for the European Union. It is the second of a three part European Climate Foundation (ECF) Roadmap 2050 project that, through (1) analysis, (2) policy advice, and (3) outreach seeks to define a coherent energy future and how to get there. U.S. planners can learn a lot from it, both about specifics and about perspective. 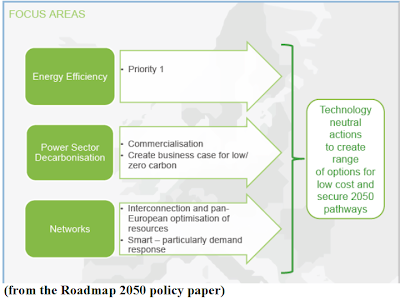 The new paper describes challenges in 2 crucial policy areas, (1) driving new EE investment beyond the 2020 goal of 20% improvement all the way to 2050 and (2) getting growth started by 2015 toward making 80%-to-95% of the generation of EU electricity emissions-free by 2050. Its 9 central proposals are aimed at achieving the requirements described in the previous paper for building EE, New Energy, new trans-European transmission and new interlocking trans-European energy markets with incentives to phase out Old Energy and reduce the cost of New Energy.

More than a footnote: As this report demonstrates, EU leaders remain fixated on the false hope offered by “clean” coal. This could be quite literally a disastrous miscalculation. Politicians in the U.S., the EU and the rest of the world must get over this delusion and move to real New Energy commitments soon. The success of the world’s fight against global climate change may rest on EU leaders coming to their senses on this issue. 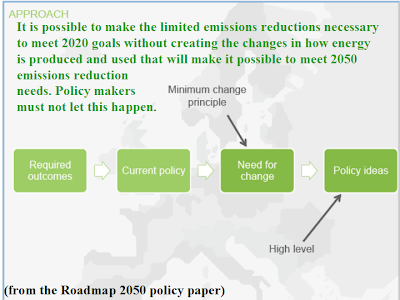 This post is based on A zero-carbon European power system in 2050: proposals for a policy package by P.A. Boot and B. Van Bree (April 2010, Energy Research Center of the Netherlands)