Here’s a statistic that will warm the cockles of the hearts of all those who wish the U.S. ill: Of the top 20 economies in the world, the U.S. ranks 10th in percent of GDP invested in New Energy and Energy Efficiency.

If, as some say, there is an “arms race” for dominance in the coming international New Energy economy, the U.S. is moving toward submission. If, as others say, there is a 21st century “space race” going on, the U.S. soon may not be able to overcome the force of gravity.

It makes headlines and captures attention to portray the emergence of the international New Energy economy as an arms race or a space race. In actuality, the international community of nations is attempting a Normandy invasion against dependence on the Old Energy economy of yesterday in order to win the struggle against the global climate change Old Energy has created.

And, as Who’s Winning the Clean Energy Race? Growth, Competition and Opportunity in the World’s Largest Economies from the Pew Charitable Trusts makes clear, the U.S. is rapidly losing its leadership role in the assault. If, therefore, the community of nations succeeds in the assault and wins the war, the U.S. may end up in the same dependent position in the climate change-defeating “post-war” economy that “old Europe” was in after the invasion of Normandy. ::continue::

In the relative terms of investment intensity (the percent of GDP invested in New Energy, NE, and Energy Efficiency, EE), Spain invested five times what the U.S. did in 2009. China, Brazil and the UK invested three times more. 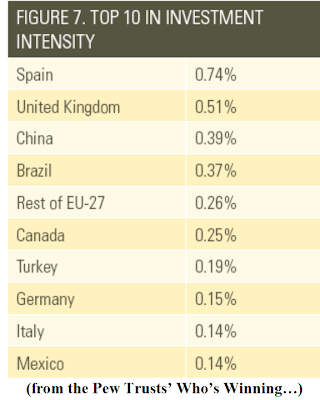 The Pew report gathers salient and incisive numbers on NE & EE in the G20 nations which, as the world’s top 20 economies, account for 90% of world finance and investment. It offers some aggregate numbers that demonstrate to anybody who has had their head in a barrel of oil for the last 5 years and hasn’t gotten the word about the emerging New Energy economy:

(4) The G20 economies had an average investment of $32 billion per quarter in each of the last three quarters of 2009. And the enormous investments made in NE & EE by many of the G20 governments to counteract the economic downturn haven’t yet really begun getting a response from innovators, businesses and installers. G20 investment in the NE & EE sector is expected to grow 25% to $200 billion in 2010 and at least as much again in 2011.

The Pew study shows clearly that national policy decisions that set goals and create incentives have unequivocal impacts on the growth of G20 nations’ New Energy economies. Nations like China, Brazil, the UK, Germany and Spain have aggressive policies and growing NE & EE capabilities. The U.S., which has no compelling national goals and inconsistent financial incentives, is falling toward also-ran status.

As commentators continue to point out, the vaunted U.S. leadership in innovation and entrepreneurship is at risk. Its own venture capital, long the force that has given the U.S. superpower status in the world economy, is migrating to offshore NE & EE opportunities.

The courageous people of Western Europe stood up to fascism in World War II but their economies were crushed and they shivered in darkness for several winters afterward while the U.S. helped them recover. If the U.S. does not get with the effort the world is making to defeat its current climate change threat, Washington may be asking the leaders of the New Energy invasion for help in winters to come. 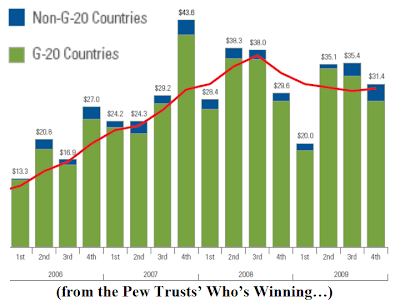