The numbers are in on 2009 and they are impressive. Anybody who endured the year, they show, has earned the right to brag about it in years to come. Anybody who started a business deserves a medal. Venture capital spending was lower than in any year this century. There were only 13 U.S. initial public offerings (IPOs). The only thing that kept the recession from becoming a depression was historic-level government spending. New Energy, however, held its own.

Though global investment in all New Energies fell from 2008’s $155.4 billion to $145.3 billion in 2009 and U.S. venture capital (VC) investment in New Energy fell from 2008’s $3.2 billion to $2.2 billion in 2009, New Energy’s share of total U.S. VC investment was bigger than ever before, going from 11.4% to 12.5%. And, thanks to being tapped as part of the answer to the economic devastation and winning healthy chunks of that government spending around the world, New Energy has started coming back. 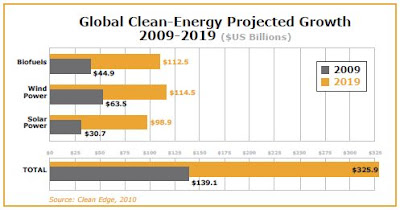 Global revenue for solar photovoltaics (PV), wind power, and biofuels was $139.1 billion in 2009.

Though solar revenues fell for the first time in this century, revenues (including modules, system components, and installation) are nevertheless expected to grow from $30.7 billion in 2009 to $98.9 billion by 2019. New installations reached just less than 6 gigawatts worldwide in 2009, a nearly six times over increase from 5 years earlier, when the solar PV market achieved gigawatt capacity for the first time. But because of rapidly declining solar PV prices, industry revenues between 2008 and 2009 were down about 20% – from a revised $38.5 billion in 2008 – as solar prices dropped from an average $7 peak watt installed in 2008 to $5.12 peak watt installed last year. 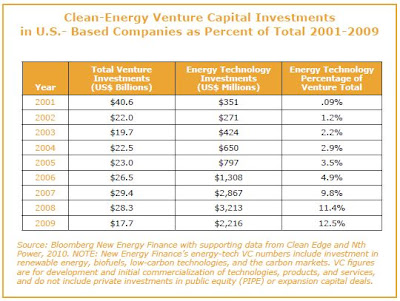 Given the slow and so far nearly jobless economic recovery, it is possible these are the most significant numbers in the Clean Edge report: The global solar PV and wind industries presently provide 830,000+ direct and indirect jobs and are expected to provide 3.3+ million jobs by 2019.

For many observers, the result of the December UN summit in Copenhagen was the strong impression there is no hope for significant unified action by the world’s governments to turn back global climate change and the only remaining hope is the private sector. The stalemate in the U.S. Senate on climate change legislation only underscores this impression.

Though the fight against climate change will not, apparently, be the driver behind the development of New Energy and Energy Efficiency on a global scale, something perhaps even more profound (if less altruistic) remains: The profit motive.

Talk of the polar bear’s fate has faded but energy security, national interests, economic revitalization and jobs now seem even better reasons to put a price on greenhouse gas emissions and use the revenues generated to build a New Energy economy.