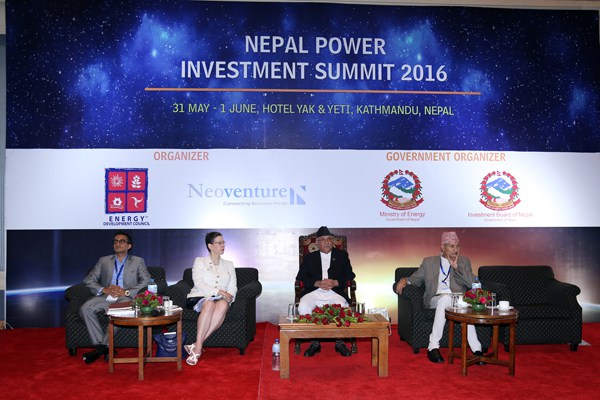 With the keynote that Nepal requires US$20 billion to develop 10 GW of on-grid hydropower projects in the next 10 years, the largest power investment conference concluded successfully today in Hotel Yak & Yeti, Kathmandu.

The Energy Development Council (EDC) — the umbrella organization of the entire energy sector — organized the four-day summit ‘Nepal Power Investment Summit 2016’ with the government partnership Ministry of Energy and Investment Board of Nepal.

Investors expressed interest in exploring investing in mid- and large-scale power projects in Nepal worth billions of dollars provided the investment environment improved and Nepal’s ranking in the ease of doing business increased. They have also expected to soon have a one-window policy to get all necessary approvals and permits for doing business.

While under the Nepal Electricity Authority (NEA) and private power producer (PPP) model, NEA is construct 1,046 MW of hydropower projects. NEA also is conducting feasibility studies for projects, such as Dudhkoshi, Upper Arun, Tamor and Uttar Ganga, among others.

EDC at the summit launched the book “Inventory of Rivers of Nepal,” which identifies 11,614 rivers and rivulets. In addition, the organization will soon carry out the study of the potential of hydropower projects of those rivers and rivulets in a second phase.

During the summit, 40 speakers from India, Singapore, Thailand, Bhutan, China, the U.S., and the U.K., among others, highlighted the investment challenges and opportunities on energy and infrastructure development in Nepal. Speakers also emphasized the need to develop alternative source of energy.

Aliana B Teplitz, Ambassador of the U.S. Embassy for Nepal said: “Despite having a huge potential of generating more than 40,000 MW of electricity, the installed capacity of Nepal is merely at 780 MW. There is still [a lot of] room for development.”

She also said there is a need to have better policy and legislation to improve the present scenario.

NEA presented that altogether 1,330 MW projects are under construction and will be completed on 2020.

“We need to invest about US$20 billion in the next 10 years for generating 10,000 MW in a decade,” Lila Nath Bhattarai, Deputy Managing Director at Engineering Services Directorate, NEA, said.

NEA also said that it faces various geological problems, contractors not working efficiently, technical problems in structures and other issues.

“Tedious and elongated processes for acquiring necessary approvals and permits for doing business in Nepal is one of the biggest hindrances for investors,” Allard Nooy, CEO at Infraco Asia, said.

In a presentation at the summit, Nooy outlined the challenges for investment in the energy and infrastructure sector in Nepal. Nooy said: “No coordinated approach to get necessary approvals and permits and lack of adequate background information required of projects and related risks are major challenges for the investors.”

Noting that hydroelectric projects are in great need for the country, he said that “the government needs to introduce a more transparent regulatory framework with more satisfactory return in order to attract foreign direct investments to have economic transformation.”

According to Nooy, the generation of electricity increased twofold from 2001 to 2013, while the import from India has increased by four times.

Zachary Smith, CEO of Radiance Renewable Technologies, said that foreign investors look for lower political risks, ease of doing business, long-term incentives packages and policy that bridges between investors and locals to better understand the environment. According to him, the government policy has to be precise and clear and also have a framework that allows flexibility in order to allure investors.

There were more than 200 participants at the summit, hailing from China, the U.S., Canada, Bulgaria, Norway, India, Bhutan, Slovenia, Czech Republic, Thailand, Vietnam, France, Austria, and the U.K., among others.