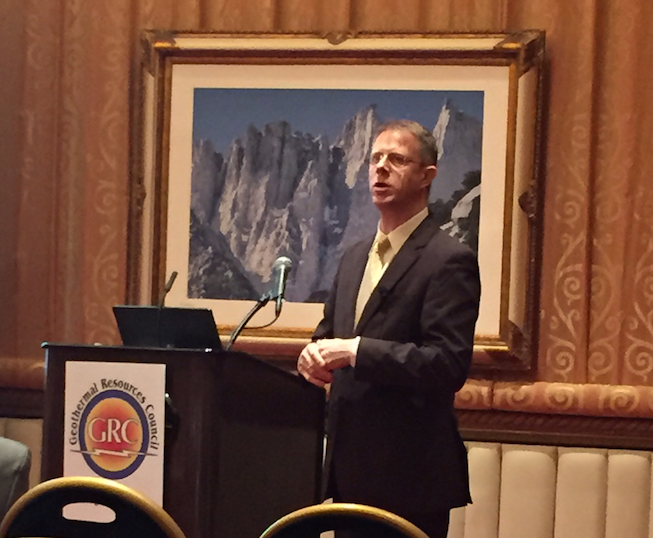 Speaking during the Geothermal Resources Council 39th Annual Meeting in Reno, Nev., Audinet said that the increased spending from multinational banks, such as World Bank, is “a big achievement.”

A result of the World Bank-initiated Global Geothermal Development Plan, the investment in exploration is helping grow the global geothermal industry.

About 15 percent of capital expenditures for geothermal projects must be invested in exploration in order for the projects to move forward, Audinet said, adding that from 1977 to 2012, about 94 percent of the $3 billion invested in geothermal development by multinational banks was dedicated to above-ground infrastructure.

World Bank in 2013 formed the Global Geothermal Development Plan to raise money that could be allocated to financing exploration in countries where equity is hard to find, Audinet said. To date, the plan has raised $250 million.

Audinet said that a portion of the $250 million is held by the Climate Investment Funds, and ESMAP uses a portion to finance identification and preparation of projects as well as other forms of technical assistance required to structure geothermal advancements in countries.

The funding now supports programs in seven countries, and Audinet said conversations are ongoing with Dominica, Ethiopia and Fiji that could lead to additional investments.

“Over the last 12 months, we have slowed down on the fundraising, but we will have to start fundraising again in the next few months,” he said.

The $10.7 million Armenia Geothermal Exploratory Drilling program is a public support project at the Karkar site in the Sjunik region for drilling “to validate the resource before it is in turn tendered to the private sector,” Audinet said. Preparation of access roads and the drill site are underway, he added.

With a $53 million investment, the Chile Technical Assistance for Geothermal Development program seeks to enhance geothermal market conditions and provide risk sharing for resource development. In addition, the program is working to improve policy frameworks and strengthen management capabilities for mobilizing investments in geothermal energy, according to Audinet.

Chile is a “complex country,” he said. “The government’s hands are tied there. They really want to find a way to unlock exploration and stimulate it much more than is the case currently.”

The program recently released a call for expressions of interest from technical consultants.

“It took some time to get this project started, but it now is moving much faster,” Audinet said.

The program has contracted a project director and geothermal consulting company, and is now working to contract a drilling services company.

Currently in the design phase, the Indonesia Geothermal Energy Upstream Development program will invest $106 million in its first phase as a risk sharing tool for resource confirmation at five sites in Indonesia.

The program “is focused on trying to unlock money that the government of Indonesia has allocated to exploration,” Audinet said. “We are in the final stage of designing a scheme that will help move some of that money through a development bank in Indonesia.”

Implementation of the program is expected to start next year.

The $115 million Nicaragua Geothermal Resource Risk Mitigation program will leverage private risk capital for exploration drilling and resource confirmation at Casita-San Cristobal. Audinet said the program is “under preparation” and should begin in 2017.

With an investment of $3.4 million, the Saint Lucia Geothermal Resource Development program is providing upstream geothermal development preparation and project management in Soufriere, as well as transaction and regulatory support to the Ministry of Sustainable Development, Energy, Science and Technology.  According to Audinet, the program has awarded a LiDAR survey contract and is currently working to secure a contract for a technical coordinator.

The Turkey Geothermal Development Project is a two-part program, with a portion of the $375 million funding package allocated for a loan facility for resource development, including credit lines for two local banks to finance capacity drilling and power plant construction. The remaining portion of the funding will provide a risk sharing mechanism for resource confirmation.

“This project is in the final stages of design with the government of Turkey,” Audinet said, adding that implementation is expected to begin in the first half of 2016.