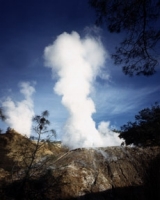 The U.S. geothermal industry will need to invest $16.9 billion over the next eight years if developers expect to tap the country’s abundant geothermal resources, according to a new report from the Iceland-based investment bank Glitnir.

The report examines the biggest U.S. geothermal markets and determines the capital costs needed to exploit those markets.

Some of the key findings of the report are:

• Glitnir estimates the investment requirement to service current projects to be some $9.5 billion. A total investment of $16.9 billion will be required to develop available resources over the next 8 years with a further $22.5 billion during the following 10 years.

• Sales of geothermal powered electricity could increase from currently $1.8 billion to $11 billion, without taking into consideration the vast opportunities for the development of geothermal direct use applications, such as geothermal heat pumps.

• The geothermal industry in the U.S. is still very fragmented, consisting of relatively few big companies and many small ones. Some of the smaller companies lack the financial strength to fully develop projects that in many cases could be profitable. Glitnir predicts there will be considerable consolidation in the industry in the next few years.

• For successful development of the geothermal industry it will be necessary to increase the capacity of drilling equipment and related human resources. As the industry is recovering from a decline that took place in the late 1980s and is to some degree competing with the oil industry for human resources, it is crucial to train and educate people to work within the sector.

The entire report from Glitnir is linked below.