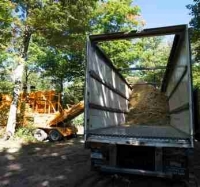 Michigan, United States [RenewableEnergyWorld.com] Michigan’s forest industry produces thousands of jobs and hundreds of thousands of tons of unused residues each year. Why not use that woody material to help generate clean electric power?

That was one of the important questions Wolverine Power Cooperative asked Michigan Technological University professor Robert Froese and colleagues regarding the cooperative’s Wolverine Clean Energy Venture near Rogers City, Mich.

The answer, presented in a report to Wolverine, state legislators and representatives of Governor Jennifer Granholm, demonstrates the potential for homegrown biomass to reduce the use of fossil fuel while also decreasing carbon dioxide emissions from the generation of electricity.

“Neither inherent productivity nor environmental sustainability is holding back biomass production,” the Michigan Tech researchers concluded. “Clearly, Wolverine has the potential to take a leading role in the development of clean energy from biomass for Michigan.”

Brian Warner, director of environmental services for Wolverine Power Cooperative, was also encouraged by the results of this initial study. “Wolverine is excited about the potential for increased use of sustainable biomass for the generation of electricity for our Michigan-based members,” Warner said.

Unused logging residues and other material removed from timberland within 75 miles of Rogers City total about 220,000 dry tons per year, enough to generate at least 35 megawatts (MW) of electricity.

Froese reported that only one-third of forest growth in the area is harvested. If forest land was utilized to its full potential, Wolverine could count on sufficient fuel from residues alone to produce enough electricity from the Rogers City plant to serve 75,000 homes.

Equally promising, the Michigan Tech researcher said, is the potential for using idle agricultural lands to grow energy crops, including switchgrass and fast growing trees such as hybrid poplar, silver maple and European larch. Within 75 miles of Rogers City, there are nearly 500,000 acres of open land not being used for agriculture. (See images below of one-year-old hybrid poplar plantings, left, and silver maple plantings, right.)

“The land is available, and it is good land for growing energy crops,” said Froese. “Also, idle land could be used without concern about competition with existing agricultural crops.”

Based on the findings of the report, Wolverine partnered again with Froese to install trial plantings this spring near the Rogers City area. These trials will help understand the optimum way to cultivate energy crops, by evaluating growth of a variety of tree species, different spacing of the species planted and various seedling types.

Other areas studied by Michigan Tech researchers included carbon dioxide emission reduction potential, environmental impacts, energy consumption, resource depletion and other implications of generating power entirely from coal compared to using 1 to 20 percent of various kinds of biomass. The use of biomass was then compared to other CO2 emission reduction options, such as geologic sequestration and improved forest management measures.

“Michigan has been blessed with an abundant forest resource. If managed wisely, this resource can help the state’s power companies reduce CO2 and other air emissions today while other promising technologies are developed for future, additional emission reductions,” Warner said.

Jennifer Donovan is Director of Public Relations at Michigan Technological University and an active member of the National Association of Science Writers.