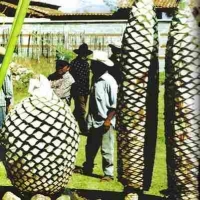 Mexico City, Mexico [RenewableEnergyWorld.com] With a history that stretches well back into pre-Columbian times, certain varieties of the Agave family are beginning to capture the attention of investors and researchers interested in indigenous plants and trees in countries around the world that are not used to produce food and have attributes that make them prospective sources of ethanol.

A small group of Mexicans from the academic and private sectors has been trying to get an Agave-to-ethanol project up and running. Years of effort have led to a tentative agreement with INE (Mexico’s national ecology institute) to provide funding that will enable the project’s research team to ramp up efforts to cultivate, conserve and patent-protect selected examples of the Agave tequilana weber and Agave angustifolia Haw. varieties and build up a germ plasm bank that would serve as repository for researchers and projects around the country, including their own Agave-to-ethanol project.

Notorious for their intoxicating effects, both tequila and mescal are derived from varieties of the genus Agave. In a country rich in botanical cultural heritage, Agave species have played a large role in traditional Mexican culture, one that rivals that of maize and cacao in significance.

Though they remain largely untested and untapped, a large and diverse range of potential products, environmental and socio-economic benefits can result from sound, long-term policies that support enhanced Agave cultivation, say proponents of the Agave-to-ethanol project, one notable member being Professor Remigio Madrigal Lugo, Mexico’s first Ph.D. in agricultural biotechnology and internationally published author who serves as a Council member at the Autonomous University of Chapingo.

These figures far outshine the plants that are dominating ethanol and biofuels’ R&D and investment today, not only in terms of potential ethanol yield per acre, but also in terms of energy balance (the ratio of energy in the product to the energy input to produce it), as well as actual and prospective planted acreage.

Moreover, “Agave is the ideal feedstock for an integrated biorefinery where biofuels, bioenergy and high-profit bioproducts are derived with a zero waste platform,” said Arturo Velez, the Agave-to-ethanol project originator, team member and a former administrative coordinator for the Mexico Confederation of Foresters.

“Agave can bring in the new era of bio-economics giving the world enough clean energy for a peaceful and secure world.

“Our enhanced Agave tequilana weber variety plants have a sugar content of 27º to 38º Brix, [which is] 3-times sugarcane’s and weigh around 300 kilos (660 pounds) each individual. But we’ve got plants from another agave species that weigh 1.2 metric tons each with sugar content around 25º Brix, double that of sugar cane. This means that annually per acre, we could easily get 5,000 gallons of distilled ethanol and fifty metric tons of dry biomass, with 33 metric tons of cellulose content.”

According to Velez’s calculations, 7 million hectares of the Agave-to-ethanol team’s enhanced Agave tequilana weber variety could provide the entire 36 billion gallons of ethanol the U.S. government needs by 2022 to comply with the renewable fuel standard set forth in December of last year, as well as 250 million metric tons of the dry biomass it is aiming to obtain by 2017.

Two other key elements appear to make Agave-to-ethanol projects even more attractive and viable: Agaves are planted widely across Mexico and the methods and technology to cultivate them is already at hand.

“The technology for producing massive amounts of our enhanced Agave variety — uniform in sugar content, size, weight, and harvesting time — is ready. This allows mechanization in the field— from establishment to harvesting — reducing costs, time and labor, which in time allows the establishment of very large plantations of Agave, that is, in the millions of hectares,” Velez said.

Some 95% of the Agavacea family lives in Mexico, Velez explained. “Agave thrives in semi-arid wastelands — 50% of Mexico — needs no watering or agrochemicals, requires very scarce field labor and grows well in any type of soil, even highly degraded and steep terrains, because it takes nitrogen from the air. One-third of the world’s habitable land is arid and semi-arid where agave can be cultivated. Some agave species accept temperature ranges from -14ºC to 50ºC,” he said.

In addition, the fact that Agave cultivation and use has roots that stretch deep into pre-Columbian Mexican culture affords Agave-to-ethanol projects additional advantages and benefits.

“The use of products derived from agaves goes back to pre-Hispanic cultures,” Dr. Madrigal pointed out. “In the present, it is common to find examples of these products in Mexico in traditional beverages like tequila, mescal and pulque; in traditional Mexican cuisine; arts and crafts; and rope and fibers, among others. Agave is a class of plants familiar and part of the national culture. A project or program successful in producing biofuel in addition to these would only be a gainful extension of uses already existing.”

The only outside funding the project has been able to attract has been from RenewableEnergyWorld.com’s contributor Thomas Blakeslee’s Clearlight Foundation, up until the INE contacted them a few weeks ago, that is.

“Prospectively, we plan with the agro-industry to employ agave varieties, which requires first of all to continue characterization and selection, establishment of an in vitro germ plasm bank for the preservation, protection and conservation of original examples of the best of varieties in order to increase the number registered in the national catalog, and preserving the rights of ownership, and have them available in the genetic and phytosanitary registry for rapid propagation and use by the agro-industry. This requires the support of government agencies, such as INE, or others to which this program applies,” Madrigal explained.

Besides looking like an extremely promising source of ethanol, the list of primary and ancillary products that could result from developing and scaling up Agave-driven biorefineries is a long one.

Agave is a known source of at least 35 other commercially viable substances that are used in food and medicinal products: inulin and fructose sugar syrup; pulp, paper and fiberboard production; textiles and rope; plastics and other commercial and industrial products, Velez noted.

“I claim that there’s no other plant or tree in the world that can produce as much sugar and cellulose…Cellulose is the organic oil substitute — green oil — and sugar can be converted into many things — Agave sugars can be even eaten by diabetics without any risk, and have a high probiotic value.

“If you make paper or notebooks with that pulp, you’ll get several times more money. So the trick is to sell only the lignin biomass and use the cellulose for something else. There’s a type of cellulose called Alpha cellulose. With it you can even make food for human consumption. It’s very expensive.”

Andrew Burger is a RenewableEnergyWorld.com international correspondent currently based in Cadiz, Spain.