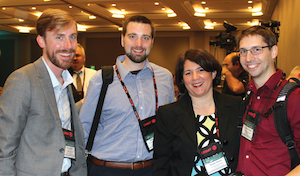 Dr. Susan G. Hamm brings with her an impressive portfolio that includes operations, budget and management, and a background in the geological sciences. The new director of the Geothermal Technologies Office sat down with me recently to discuss her new role as she leads efforts to improve performance, lower costs, and accelerate deployment of geothermal technologies.

Where did you get your start in geological/geothermal technologies?

I received an undergraduate degree in geology [from Amherst College]. There’s nothing like being out on rocks and being one with the Earth. And then I went and got a Master’s in geophysics and a Ph.D. in materials science at the University of Minnesota. I had never really anticipated that I would be a scientist growing up. I ended up in geology kind of as a fluke; I mistakenly turned to the page in the course catalog and said, “Oooh, Intro to Geology, doesn’t this sound interesting…?” And I loved it.

As director, what do you see as your top priorities?

What are your biggest challenges?

All of the above, right? The biggest challenge is that putting geothermal on the grid is expensive at this point. It is not cost-competitive because drilling is so expensive and exploration is so risky. There are also policy and other types of barriers to getting geothermal energy on the grid. And so really attacking those effectively over the next several years is going to be a challenge.

What are the most remarkable changes you’ve seen in geothermal technologies over the years?

The most remarkable change is that geothermal has become more of a player when we’re talking about renewables. Especially with the states wanting to increase their renewable power, everyone is starting to look at geothermal as a possibility.

What do you want people to know about you as director of this office?

I am excited to be here. I’ve been in the federal government since 2003. I started at Department of Homeland Security and then I was at the National Science Foundation for nine years. I also served on Capitol Hill as a Legislative Fellow. I have this beautiful view of the Capitol out my window and looking at it, especially as the sun rises or sets, reminds me of why we’re here. We’re actually trying to make life better for every person in this country, and geothermal can really make a difference in handling part of the energy demand.