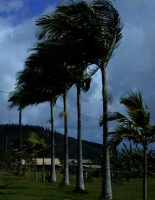 Kahului, Maui [RenewableEnergyAccess.com] A new biodiesel plant scheduled to come online on the island of Maui in 2009 may one day run on Hawaii-grown feed stock such as local palm oil, jatropha, kukui nut, coconut or other oil rich crops. The plant, which is being developed by Texas and Arizona developer BlueEarth Biofuels, is expected to produce 40 million gallons per year of biodiesel in a continuous flow refining facility.

The proposed plant, which will initially use palm oil imported from around the Pacific Rim and South America from suppliers that practice sustainable palm production, will supply biodiesel for Maui Electric Company’s (MECO) diesel generators. According to Landis Maez and Robert Wellington, managing partners of BlueEarth Biofuels LLC, a planned second and third phase will bring annual production to 120 million gallons per year by 2011. “BlueEarth will work diligently with other local biodiesel and ethanol producers to encourage increased local biofuels production, greater efficiency and lower pricing. Potentially, shared raw materials purchasing, joint land use, and using locally produced ethanol and methanol in our own process are a few of the ways we can further stimulate the local biofuels industry. We intend this to be a win-win for Maui, Hawaii and our company,” said Wellington. The plant will be owned by a partnership of BlueEarth Biofuels and a new non-regulated Hawaiian Electric Company (HECO) subsidiary, with all of the HECO subsidiary’s profits from the project going to a Hawaii Biofuels Public Trust. This public trust will be created to fund development of Hawaii’s bio-energy infrastructure — for example, for biofuels R&D at the University of Hawaii, to support the prices of Hawaii-grown biofuel feedstocks, or to enhance Hawaii’s bio-energy agriculture infrastructure. “HECO has never taken a profit on fuel,” said HECO President and CEO Mike May. “We are willing to give up the profits from this bold venture because in the long run it is good for our company and good for Hawaii to promote clean, green, local renewable energy here.” The new biodiesel plant is to be built on 15 acres at MECO’s Waena Generating Station site, across from the Central Maui Landfill. The project will lease the land at fair market value with proceeds going to offset Maui rate payers’ costs. The land lease and pricing agreement between the biodiesel facility and MECO are subject to review by the Hawaii Public Utilities Commission. “This plant will be a first step toward allowing Ma’alaea Power Plant, by far the largest electric plant on Maui, to generate all its electricity without fossil fuels. We are now examining our ability to convert all our generators at Ma’alaea that currently use oil-based diesel to biodiesel, ideally from locally grown crops,” said Ed Reinhardt, MECO President. The first phase of the plant is expected to cost $61 million, exclusive of land costs. At the request of BlueEarth Maui Biodiesel LLC, the name chosen for the venture’s project company, bills have been proposed at the Legislature to authorize a special purpose revenue bond (SPRB) for the company to build the plant. SPRBs exist to use the good credit of the state to get better rates and terms on loans for projects in the public interest with the bond repaid from the profits of the project at no cost to taxpayers. The lower interest rates realized through a SPRB in a cost-based pricing scenario such as this means the end product can be provided at a lower price than could be achieved through traditional debt or equity capital financing. “As it is built and expands over coming years, this new plant will help HECO, MECO and HELCO to meet our renewable portfolio requirements of 20 percent by 2020 and promote an agriculture-based energy economy,” said May.