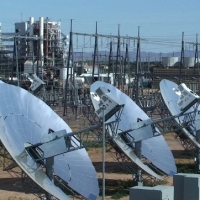 Arizona, United States — Just outside Phoenix, Arizona, sits a field of dishes reflecting the hot desert sun. Pulling up to the humming devices, installed by Stirling Energy Systems (SES) and Tessera Solar, the cars passing by on an adjacent road are dwarfed by their size.

This is the Maricopa Solar project, a 1.5-megawatt (MW) array of SunCatcher Systems (also known as the Stirling Dish Engine). In January NTR plc, which owns both SES and Tessera Solar, opened the plant after breaking ground just four months earlier.

Maricopa Solar is the first commercial project for the SunCatcher concentrating solar power (CSP) technology, which was designed and manufactured by SES. The SES SunCatcher is a 25-kilowatt solar power system that uses a 38-foot high, mirrored parabolic dish combined with an automatic tracking system to collect and focus the sun’s energy onto a Stirling engine to convert the solar thermal energy into grid quality electricity.

Maricopa Solar is comprised of 60 SunCatcher dishes and will bring energy to Salt River Project (SRP) customers in Greater Phoenix, Arizona. The SunCatchers unveiled at Maricopa Solar were manufactured and assembled in North America, mostly in Michigan by automotive suppliers. Parts for the SunCatcher dishes are also on track to be made by Linamar Corp. in Canada, which has said that it is expanding its local workforce by 1,200 people in large part to manufacture parts for SES.

The project is the result of a long development process for Stirling and Tessera. SES has been working for more than two decades to perfect the SunCatcher’s technology to make it utility-friendly. The company experienced many technical delays along the way, raising a lot of skepticism from people in the industry who feared that the technology was being over hyped.

Invented in 1816 by Robert Stirling, Stirling engines use air, helium or hydrogen, which is sealed inside the engine. The Stirling cycle needs an external heat source, which could be either solar or biomass. The heat moves the gas from a hot side to a cold side, expanding, contracting and pushing pistons. There are no exhaust valves and no combustion takes place inside the engine’s cylinders.

High volume manufacturing of the SunCatcher is expected to begin later this summer and Tessera Solar’s vice president of development, Felicia Bellows said that the company expects to break ground on utility-scale projects late this year in California and Texas. She said that despite long backlogs for transmission permitting, especially in California, where a new project could be in the queue for three years before getting permits, Tessera’s projects are on track.

“Everything is based on permitting right now, if everything moves as planned, Imperial Valley solar is the project that is most likely to come online first, followed by or even possibly preceded by the Western Ranch facility in Texas,” she said.

SES has been talking about developing large projects for years, with little to show for it. The company said it would have 300 MW developed by this year. It only has 1.5 MW.

But with backing from a larger energy company, SES and Tessera officials are still talking about building large projects. According to the company, the first project in the Imperial Valley will be a whopping 750-MW, with the first 300-MW contracted under a power purchase agreement with San Diego Gas & Electric near El Centro, California. The second, Calico, is an 850-MW project with Southern California Edison near Barstow, California; and Western Ranch is a 27-MW project with CPS Energy in West Texas. Given the company’s earlier claims, it remains to be seen whether they can pull it off.

To learn more about how the SunCatcher technology works and get an inside look at the project, watch the video below.