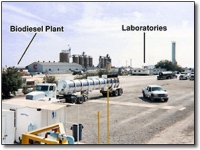 American Biofuels, has completed its first week of production test runs at its new Bakersfield Biodiesel Plant. The production capacity of the biodiesel facility is expected to reach 35 million gallons per year at full production with existing infrastructure in place.

Bakersfield, California – November 13, 2003 [SolarAccess.com] The Bakersfield Biodiesel Plant is 35 percent owned by Green Star Products, (GSPI). The proprietary reactor/separator modules, with the first module now on-line, are designed to produce 2.5 million gallons per year per module and can quickly be added to increase plant production capacity as biodiesel markets expand. GSPI said the Bakersfield Plant capacity is significant when considering that the entire U.S. production of Biodiesel for 2002 was only 15 million gallons. During the first week of start-up runs the plant was tested with different percentages of recycled and virgin vegetable oil. Recycled vegetable oil was gathered from local restaurants and food processors eagerly wanting to participate in cleaning up the environment. Virgin vegetable oil consisted of soybean oil obtained from U.S. farmers. Initial production test runs are required by all commercial and industrial plants to set relays, circuits, alarms, samples of intermediate production steps and set many other parameters. The company said this start-up process is particularly intense in a continuous flow process like the one installed in the Bakersfield Plant, which is the only continuous-flow biodiesel production facility in the U.S. The first biodiesel fuel produced by the Bakersfield Plant has been delivered to Hondo Chemical, who previously announced that they will be the first industrial facility in Bakersfield to use biodiesel in its off-road equipment to help clean Bakersfield’s air, which is the third most polluted in the U.S. Recently, the California Air Resources Board (CARB) indicated that 66 percent of diesel emissions in California come from off-road diesel equipment and machinery, and they have now initiated a regulatory process to address this problem. The start-up of the Bakersfield Biodiesel Plant comes in the middle of a heated political battle in the U.S. Congress concerning the Energy Bill, which is now in a Conference Committee, where differences between House and Senate versions are being worked out. On July 30, 2003, the U.S. Senate passed the Energy Bill by a non-partisan vote of 84-12. The Senate bill contained key tax provisions for biodiesel, including an excise tax credit for biodiesel made from both virgin and recycled vegetable oil. These tax incentives are essential to the biodiesel industry to compete with petroleum, which already receives numerous tax incentives and tax deductions. Meanwhile, the European Union (E.U.) has taken significant measures to promote renewable fuels and energy independence in Europe. They have directed their Member States to pass almost identical tax incentives to those passed by the Senate. The E.U. has the same energy problem the U.S. has and imports approximately 8,000,000 barrels of oil per day from an oil industry that is increasingly becoming dependent on Middle East reserves for the majority of their oil as the political situation becomes increasingly unstable. The E.U. already produces almost 20 times more biodiesel than the U.S., with production expected to be above 1.3 million tons (350 million gallons) in 2003. The E.U. has passed a Directive that will ensure that an even greater percentage of liquid fuels come from biofuels (ethanol or biodiesel) which will require that 2 percent of petroleum contain biofuels in 2005, rising by 3/4 percent per year to 20 percent by 2020. This is projected to increase demand to 5 million metric tons by 2006 and 15 million metric tons by 2010 (about 4 billion gallons). This Directive is a key part of the E.U. strategy to achieve energy independence, reduced dependence on imported oil, reduce air pollution and reduce greenhouse gas emissions. A key part of that strategy involves different tax treatment for biofuels. GSPI said the U.S. is lagging far behind the E.U. in efforts to promote biofuels and attain energy independence and may pay dearly for this mistake if oil shocks of the 1970s are repeated in the coming decade.