The same day Senate Majority Leader Harry Reid (D-Nev) announced he would not pursue comprehensive energy and climate legislation, the widely respected Johns Hopkins University Center for Climate Strategies (CCS) released a study detailing what could be gained – though it is now lost in rising political tides for the foreseeable future – from such legislation.

In Impacts of Comprehensive Climate and Energy Policy Options on the U.S. Economy, CCS derived a set of 23 policy actions that have proven cost-effective in the building of New Energy and Energy Efficiency and the reduction of greenhouse gas emissions (GhGs) and other pollutants in the real-world practices of 16 states. It developed three scenarios, one in which the 23 policy actions are applied independently, one in which they are applied in conjunction with a rigorous Cap&Trade system and one in which they are applied with a less ambitious Cap&Trade system like the one just rejected by Reid’s Senate.

In the scenarios, the report showed the partisan, election year infighting in Congress has cost the nation the opportunity to generate millions of new jobs and hundreds of billions of dollars in domestic economic activity while securing the nation’s energy supply and restraining the rising cost of electricity. In the most ambitious scenario, in which the building of New Energy and Energy Efficiency and the fight against climate change are all prioritized, U.S. GhGs could be cut 27% below the 1990 level in 2020 and, at the same time, (1) energy prices would fall, (2) GDP would grow $159.6 billion and the workforce would gain a net 2.5 million new jobs. ::continue:: 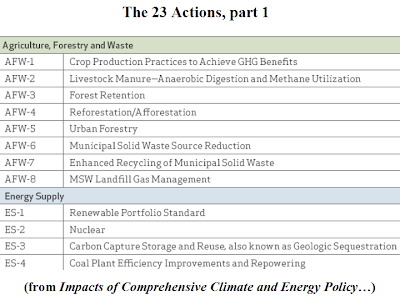 For its cost-benefit analysis of the less aggressive GhG-cutting scenario, the study modeled the Kerry-Lieberman American Power Act Cap&Trade system, the last actual bill to be rejected by Reid and the Senate Democratic leadership before they announced they had given up on substantive climate and energy action for this year.

The one comfort is that, in giving up comprehensive energy and climate legislation, the Senate protected the Environmental Protection Agency’s legal authority to enforce limits on GhGs.

Latest update: Senator Reid delayed itroduction of the scaled-back legislation, suggesting there could be a last minute change in plans.

Afterthought: Since the moment the Democrats announced there would be no comprehensive legislation, they and there partisan allies have aggressively placed blame for the legislation’s failure on the Republican opposition. In fact, there is a contingent of moderate Democrats that was equally opposed to action on climate. The vigorous polemics and finger-pointing suggest some Democrats may see as much electioneering value in not taking action as do their opponents. 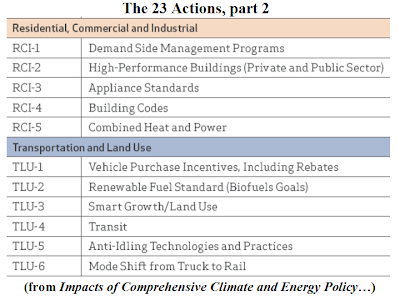 This post is based on New Climate and Energy Policies Could Create 2.5 Million Jobs, Hold Down Energy Costs (July 22, 2010, PRNewswire)