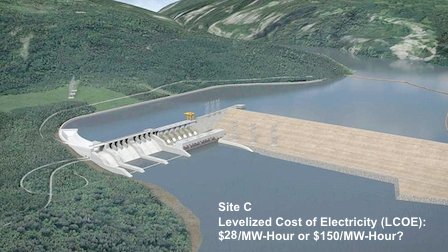 One of my pet peeves has been a metric with the glamorous acronym LCOE which stands for Levelized Cost of Electricity. This is the “go to” number when evaluating electricity generation sources and comments about solar and wind reaching “grid parity” relate to this measure.

My annoyance comes from comparisons of LCOE for solar (PV and thermal), wind, and hydro which truly is like comparing apples to zebras. In a recent publication by the respected Energy Information Agency the following figures for Total System LCOE were presented in Table 1b;

These figures are similar to others I have seen published in many places and they have never made any sense to me.

My parents had a cottage on Lake Agnew in Ontario which was formed by the building of the Big Eddy dam in 1929. There are 5 other smaller dams within a short distance and I know that they are all still operating and producing significant value for their owners. Several are more than 100 years old and will not be decommissioned in the foreseeable future.

So it is clear to me that these dams produce the least expensive electricity that can be generated from any source. Why then is it that LCOE values for hydro are not dramatically less than other renewable sources?

After some investigation it has become clear that this is an issue that has a lot more to do with politics and “spin” than it does with anything meaningful. And the same problem applies to any capital intensive project that has a very long service life (for example, solar thermal with molten salt storage which has a major advantage over solar PV because it can generate electricity 24 hours a day to meet peak demand).

In this post I will focus on the “Site C” dam in British Columbia, currently under construction. For this particular project is is possible to say that the LCOE is $150/MW-Hour or $28/MW-Hour — neither statement is factually wrong but one is more realistic and more likely than the other. This is a large discrepancy and demands an explanation.

The major factors underlying this wide variation in values for LCOE are the cost of capital, the time period being considered, and the forecast capacity factor for the dam.

So imagine if you paid off your house over 70 years. Most houses are still being used for at least that length of time. Many houses in Europe are hundreds of years old. Choosing a 70 year amortization period would reduce your monthly payments even further but at a 6 percent interest rate you would end up paying over 4 times the purchase price for your house. That doesn’t make sense and banks don’t offer mortgages for more than 35 years.

But that amortization period is exactly what is used in the most commonly published LCOE values for Site C.

Now you might wonder why BC Hydro would choose that approach when it clearly results in the highest total cost for the Site C dam. Well, if you need to present the lowest LCOE during the amortization period then longer amortization periods give you lower numbers. That doesn’t make sense but the optics are better.

For example, if you used a more realistic amortization period of say 30 years the LCOE during that 30 year period would be around $125/MW-Hour. That is not a very attractive number. It also does not reflect the true cost of electricity that will be produced from this dam.

In order to understand the true long-term LCOE it is necessary to consider the period of time after the capital cost for the dam has been paid off (end of the amortization period) until the end of life for the dam.

How long will the Site C dam be in operation? There are many hydro dams in the world that are more than 100 years old and operating just as efficiently as when they were constructed. Personally, I think most of these dams will be in operation in a thousand years. Why wouldn’t they be? (the Cornalvo dam built by the Romans is over 1,800 years old!).

However, projecting service life beyond 100 years is a bit speculative so let’s leave it at 100 years. That’s what BC Hydro has done in published materials for Site C.

If a 70 year amortization period is used then the only costs for the dam over the last 30 years are operating and maintenance expenses which are very small compared to the capital cost. Although it is again highly speculative to try and forecast O&M expenses 70 years from now reasonable guesses result in LCOE values of $5-10/MW-Hour. Combining the costs during and after the amortization period for the Site C dam results in LCOE values of around $75-90/MW-Hour.

But what if a more realistic amortization period of 30 years is used? BC Hydro could easily borrow that amount on capital markets or issue bonds with that type of maturity. In that case the LCOE during the first 30 years (assuming 6 percent interest/discount rate) would be $125 but the LCOE taken over the full 100 years would be about $41/MW-hour. That’s a much more attractive number.

It will likely even be better than that.

The LCOE values quoted so far have been based not only upon 6 percent interest rate but also using a capacity factor of 55 percent. That is to say that the dam would only produce 55 percent of the electricity that it is capable of producing. The capacity factor will depend upon demand and water conditions. Within the next 100 years all automobiles will almost certainly be electric drive which will significantly increase electricity demand in the province. If Alberta follows through on its commitment to eliminate burning coal to generate electricity then there will also be additional demand on BC hydro power as a balancing resource for wind farms. Barring a drought it is conceivable that the capacity factor for the site C dam could increase to as much as 75 percent.

And what about interest rates for a large loan? BC Hydro would be able to obtain capital at the most attractive rates possible for a loan of the size required for Site C. BC Hydro could issue a Site C 30 year bond at a rate of 4.5 percent which would be competitive with other high quality debt instruments.

Using an interest/discount rate of 4.5 percent, an amortization period of 30 years and a capacity factor of 60 percent would yield LCOE of about $32/MW-hour over 100 years. In my opinion that is the most realistic and likely LCOE for the Site C dam.

The tables below provide other values which indicate the sensitivity to amortization period, interest/discount rate, and capacity factor.

It it clear to me that hydro, amortized over a reasonable period, is by far the least expensive renewable resource available. More importantly, hydro power is available when it is needed each and every day because of its ability to follow system load. The only other renewable technology that can do that is geothermal and it is not available in most geographic areas (hydro-kinetic turbines would also be able to provide that kind of reliability and that technology deserves R&D funding and other financial supports).

For solar PV and wind it would only be reasonable to add a significant additional cost for energy storage or some other reliable generation source to provide power on calm nights. Those critical additional costs are conveniently ignored when comparing LCOE values for solar, wind, and hydro. As a result claims of “grid parity” for solar PV and wind are nonsense. Solar thermal with molten salt storage, on the other hand, is becoming a reliable and cost effective generation source in subtropical regions as demonstrated by a recent project by Solar Reserve being built in Chile.

One final note. It can be argued quite reasonably that those of us who will “shuffle off this mortal coil” before the Site C dam has been paid for will never see the benefits of the low cost power this dam will generate for decades or perhaps centuries in the future. So be it. We have, without question, enjoyed and will continue to enjoy some of the world’s lowest electricity rates because of the investments made in dam construction decades ago. As far as I am concerned I can imagine no greater legacy for our children and grandchildren than a source of clean, renewable energy that will last for their lifetimes and beyond.

This article was originally published by The Black Swan Blog and was republished with permission.