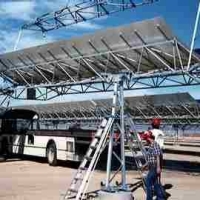 Washington, DC, United States [RenewableEnergyWorld.com] At the heart of the economic stimulus package making its way through Congress is the creation of jobs in renewable energy and other environmentally friendly services. But a new report released by labor organizers and environmentalists warns that those jobs must be more than green.

The new report, entitled High Road or Low Road, Job Quality in the New Green Economy, says that green jobs must comply with standards that can sustain families and fuel the economy as well as protect the environment.

“I can sit in Michigan in the beautiful Upper Peninsula [of the state] and watch barges come down from the St. Lawrence Seaway across Lake Superior over to Duluth, Minnesota, that have wind turbines on them, made outside this country,” she says.

Stabenow says it is a lost opportunity when jobs in the wind and solar energy industry are exported to Mexico or China for cheap labor. But conditions vary widely for workers at ‘green’ manufacturers in the United States, says Philip Mattera, research director for the nonprofit Good Jobs First and lead author of the report.

“We found examples of very well-paying middle class jobs in areas such as green construction and manufacturing of components for wind and solar energy and even recycling, but we also found examples of companies that are providing substandard wages, inadequate benefits and overall poor working conditions,” he says.

“A green job is not always a good job,” says labor leader Terrance O’Sullivan, speaking at the release of the report. He says quality jobs are those with good wages, health benefits and training opportunities.

“We are obligated to ensure that our investments support communities and families,” he says.

Gerding Edlen executive Dennie Wilde says the effort to create a sustainable and livable community is a win-win strategy for industry and the American worker.

“We can build a healthy environment. We can renovate our cities. We can create and maintain living wage jobs, and we can do this through the new green economy. We think this is the new national model for business of all types, not just construction.”

Cathy Duvall agrees with that assessment. Duvall is the political director for the Sierra Club and part of the coalition that commissioned the report. She says partnering with labor groups offers distinct advantages for moving the environmental agenda forward.

“And so it has become an imperative for us to figure out: How do we get what we need in this new economy both for the environment and for American families?”

Green jobs, Duvall argues, are not a short-term fix in bad economic times. With so much at stake, she says, the nation must make sure that those jobs are quality jobs that can protect the planet and help the nation prosper.

Rosanne Skirble is a Voice of America contributor.