Linz, Austria — Solar thermal systems have enormous potential for industry. About 30 percent of industrial heat demand is at temperatures below 100°C, which can be provided with commercially available solar thermal collectors. However, the global and European markets are very much in their infancy; only a few hundred installations currently exist.

Using solar thermal process heat in European industrial processes presents manifold benefits. It will support companies in long-term cost stability of their hot water provision and thereby contribute to their competitiveness; it will open up a new business field for the renewable energy industry and thereby promote business development and green jobs; and it will contribute to the energy, climate and environmental goals of the EU, its Member States, its regions and cities.

However, in order to realise this potential and to deliver these benefits, significant existing market barriers for solar process heat must be overcome. One problem is the economic viability of solar process heat installations, which is often due – among other reasons – to very low prices for fossil fuels in industry and the short payback periods for investments expected in many industrial companies. Also, in an early phase of market development, costs for planning and setup tend to be high due to the lack of experience of the companies involved.

Then there is the “no interest — no know-how — no market” problem. There is a great lack of information across the value chain because, firstly, solar companies often lack an understanding of the complexity of industrial processes and system integration as well as the skills for successful marketing to industrial companies. Secondly, specialists in industrial energy systems generally know very little about solar thermal technologies. They tend to overestimate the costs and to underestimate the energy production, and therefore have no experience in system integration. Also, management in industrial companies is not aware of the possibility of using solar thermal for industrial processes and therefore does not ask planners to include this option in their offers. And there is a lack of standardised solutions and communication among these groups: policymakers at European, national and regional levels are generally not aware of solar process heat.

The project Solar Process Heat — SO-PRO aimed to tackle these barriers and to trigger the startup of markets for solar process heat in six European regions, most of which feature colder climates (Upper Austria, the regions of Castillas y Madrid in Spain, South Bohemia in the Czech Republic, North-Rhine Westphalia and Saxony in Germany and the Maribor region in Slovenia). The project was supported by the Intelligent Energy Europe programme and co-ordinated by O.Ö. Energiesparverband, the energy agency of Upper Austria.

SO-PRO focused its activities on low-temperature industrial processes which are suitable to be supplied by solar thermal collectors. Promising processes include cleaning and washing, heating of baths and vessels, and drying as well as heating of make-up water for steam networks. These processes are used very frequently in a wide range of industries. Special attention was paid to continuous open processes with no mass or heat recovery, since they can have a high potential for the integration of solar thermal.

For the economic viability of solar process heat, the load profile of the process is crucial. Heat demand should occur on at least five days of the week and also during the summer months. Other important factors for solar heat integration include the available temperature levels in the plant as well as the process temperature itself, often economically best if below 50°C. Solar thermal energy can be directly integrated into the processes or into the heat distribution network. 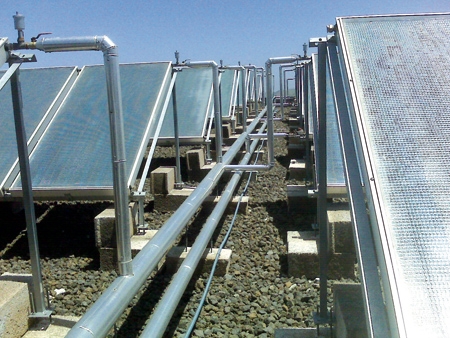 Within the SO-PRO project, self-assessment checklists were developed which would allow decision-makers in industry to make a preliminary analysis of whether solar thermal could be suitable for their processes. The checklists were split into two steps. The “K.O. criteria” included the questions: Does the company need process heat below 100°? Is space available to install solar thermal collectors at the company site? Is this space oriented towards south/south-east/south-west or on a flat roof? Does the company use fossil fuels for process heat during summer months? If any of the “K.O” questions are answered with “no,” it is rather unlikely that solar process heat will be economically feasible in most European climates.

The “OK criteria” included the questions: Is process heat required from March to September? At least during five days per week? Are there plans for reconstruction/expansion at the site during the coming years? Is heat recovery from other processes technically or economically impossible? Is a payback period of more than five years for energy investments acceptable? Is there a general interest in the use of renewable energy sources?

Additionally, a design guide on integrating solar thermal into industrial processes was developed by Fraunhofer ISE and adapted by the partners to their regional contexts. The design guide includes load profiles, nomograms and system concepts for the four applications (heating of hot water for washing or cleaning; heating of make-up water for steam networks; bath or vessel heating; and convective drying with hot air).

In principle, the market outlook for solar process heat is rather positive. Especially in well-developed solar thermal markets in Europe, noticeable market development could take place in the coming years. However, a faster market uptake needs dedicated programmes and concerted efforts by market actors to tackle the economic barriers as well as information gaps across the value chain.

Promising approaches to starting market development could include solar thermal action plans with concrete measures for solar process heat; support to R &amp; D as well as demonstration programmes (for example, the first 100, the first 1000 installations); financial support, either through subsidies or tax incentives; promotional measures to make solar process heat better known among decision-makers in industry; building up skills in the relevant products and service provider companies and monitoring of systems and quality assurance.

In technical and practical terms, solar process heat is more often linked to energy efficiency measures in an industrial process than to the generation of renewable electricity. Therefore, policy support and promotional activities should also be taken in connection with measures for energy efficiency in industry.

Montesano specialises in meat products and is well-known for its Iberic ham. As in many food industries, the production process requires large amounts of warm water for cleaning and washing processes. A solar thermal system of 252 m2 was installed in Jerez de los Caballeros, with two 15,000 litre buffer storages. The investment costs were €175,000, with a payback time of about seven years.

SOVEN is a sheep wool processing company in Selnica ob Dravi. Its hot water demand is mostly for washing, sanitising and colouring processes, which require temperatures of 40-45°C. A solar thermal system with 7 m2 was installed. Investment costs were about €5500. The annual solar fraction is calculated to be 70%.

Hustert Galvanik in Rahden specialises in surface treatment and electroplating (galvanising). A solar thermal installation with 221 m2 (vacuum tubes) was installed, supporting the heating process for the industrial baths which require 80°C. The solar fraction is expected to be about 40%. Total investment costs were about €160,000.

Asamer operates a gravel and concrete plant. As part of a comprehensive renovation – which also included a thermal retrofitting of the office building – a heat distribution grid supplied by biomass and a solar thermal system (167 m2 of flat plate collectors) and two buffer storage tanks were installed. During the summer months the solar installation is calculated to cover all heat needs at the company site.