London, UK — Advanced biofuels mark the next step in a rapidly developing global industry which aims to reduce dependence on imported fossil fuels and in part free countries from oil pricing shocks that can rock their economies.

First generation biofuels have friends and foes throughout the world. For some they represent a logical step in the development of essential alternatives to fossil fuels, while others view them as the product of an expensive, over-subsidised and uncompetitive industry which is at best only capable of producing limited greenhouse gas emission savings on the business as usual case.

Advanced, or second generation biofuels, according to their producers, can help bridge the gap between existing technologies and the ever-growing demand for fuel without further threatening food supply chains or increasing the impact on biodiversity in the areas used to grow dedicated fuel crops.

Importantly, and what sets these latest fuels apart from their first-generation predecessors, is the fact that they are produced using feedstock that would normally be classed as waste or non-food.

These include parts of crops such as stems, leaves and husks as well as non-food crops like switchgrass, jatropha, miscanthus and limited-cereal bearing grain. In addition, so-called green waste including forest residues, park waste, animal fats and tallow and used vegetable oil. Those in the industry argue that such developments are the brink of the next big renewable trend.

Dynamic Fuels is a 50/50 joint venture between Syntroleum and Tyson Foods which uses non-food grade animal fats and greases as the core ingredients in the production of its renewable energy fuels.

In October 2010 the company began producing fuel at its facility in the US state of Illinois ahead of the official launch of the plant in November. The site has a boiler-plate capacity of up to75 million gallons/year (284 million litres/year) of fuel.

Speaking at the launch, a spokesman for Tyson Foods said: ‘This fuel offers the same benefits of synthetic fields derived from coal or natural gas, including substantial performance and environmental advantages over petroleum-based fuels.’ 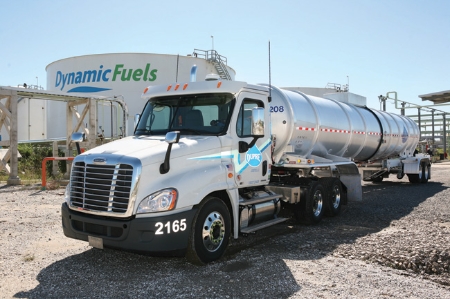 To date the plant, has manufactured renewable diesel with a cloud point of 26oF and a cetane value of 88, which the company says is more than twice that of the ATSM – formerly known as the American Society for Testing and Materials – petroleum diesel specification. In addition, the diesel fuel product meets all ASTM D975 specifications for diesel fuel, the company says.

Syntroleum CEO Gary Roth said: ‘Our US plant is producing some of the highest quality diesel fuel in the world.’

A wide range of distributors and end-users have reportedly shown their interest in the company’s product, notably the US military, and the company has also manufactured jet fuels for testing by the US Air Force.

In November GE Energy Financial Services joined an US$8 million funding round for CoolPlanetBioFuels. Speaking at the time CoolPlanet’s President and chief technology officer Mike Cheiky said that having GE and its technical and market resources on board could accelerate CoolPlanet’s development to a level ‘well beyond’ that of simply of the financial investment.

Basil R. Horangic of North Bridge Venture Partners, which led the investment round, said: ‘We’ve been very impressed by the progress CoolPlanet has made since we initially backed it one year ago and are pleased to have GE on board. The fuel market is one of the world’s largest [worth] about $4 trillion per year. Today biofuels are only a tiny portion of that market but are poised for rapid growth based on concerns about global warming and importing oil. CoolPlanet’s technology could be a major driver in expanding the use of low carbon footprint.’

Denmark-based Novozymes has a portfolio of high-yielding enzymes which are designed to optimise the conversion of grains such as corn, barley and wheat into ethanol. The company claims its enzymes enable higher yields, faster throughput, and lower processing costs. In October 2010, Brazil’s Petrobras and Novozymes entered an agreement to develop a new route to produce second generation biofuel from sugarcane bagasse. It is estimated that bagasse-to-ethanol technology could increase the country’s ethanol production by some 40% without having to increase the crop area required.

Based in California, Bluefire is one of only four companies awarded funding from the US Department of Energy to construct a commercial scale cellulosic ethanol production facility. In addition it also received a grant increase of$488 million under the American Recovery and Reinvestment Act in December 2009.

The company’s stated goal is ‘to develop and operate high-value carbohydrate-based transportation fuel production facilities to provide a viable alternative to fossil fuels on a world-wide basis’. Its biorefinery sites will convert widely available, inexpensive, organic materials such as agricultural residues, biomass crops, wood residues, and cellulose in municipal solid wastes into ethanol.

In November 2010 the company obtained its final air, wastewater and storm permits from the Mississippi Department of Environment Quality to begin construction of its first commercial-scale cellulosic ethanol facility. This plant has been designed to produce approximately 19 million gallon/year (72 million litres/year) of ethanol once operational.

The nature of TMO’s thermophilic organism lends itself to a significantly different process for the production of ethanol from cellulosic biomass, the company says. By exploiting the high temperature that the organism favours, fermentation can be performed at temperatures in excess of 60ºC, bringing a number of benefits, it says.

In 2007 TMO finalised the engineering details for an industrial scale process demonstration unit (PDU) and completed its construction in the first half of 2008.

Last year TMO entered into an exclusive contract with Fiberight LLC, to design and build waste to bioethanol plants in the US. The 20-year contract is potentially worth in excess of $25 million/year to TMO.

The combination of TMO’s process with Fiberight’s fractionation and digestion technology is expected to improve the conversion of municipal solid waste (MSW) and associated cellulosic waste into ethanol.

Under the terms of the agreement, it is anticipated that 15 plants will be designed and constructed across the US within the next five years.

For each plant, TMO will receive an initial, one-off design fee plus recurring annual revenue. The site and funding for the first plant has already been secured and construction is expected to begin in 2011.

Spain’s Abengoa is a multinational corporation with several companies spanning the energy, telecoms, transportation and environmental field, of which Abengoa Bioenergy is one such example.

In September 2009 the company produced its first batch of ethanol from wheat straw and at the time said it was in the process of optimising its operation units in order to have the necessary information for the design of a biomass plant on an industrial scale in Hugoton, Kansas, US.

The company plans to ‘develop integrated concepts’ that combine first- and second-generation technologies to identify and select ‘high value-added products that can be derived from biomass.’

US-based Range Fuels says it’s different to its rivals because it can convert all, ‘not just some’, biomass into biofuels, which it claims results in higher product yields. The company’s modular facilities, it adds, allow it to bring the conversion process directly to the biomass source which in turn cuts the energy expended in supplying a facility with feedstock. Its approach is highly flexible, efficient, cost effective, eco-friendly, and scalable, it says.

In August 2010 the company produced its first celluslosic methanol from the initial phase of its first commercial cellulosic biofuels plant in Georgia, US.

The plant, located at Soperton, employs a two-step chemical process which uses heat, pressure and steam to convert non-food biomass into a synthesis gas composed of hydrogen and carbon monoxide. That is then processed by a catalyst to produce mixed alcohols that are separated and processed to field a variety of low carbon fuels including cellulosic ethanol and methanol.

Its CEO and president David Aldous said: ‘This milestone is a giant step in overcoming the technological and financing challenges facing the commercialisation of cellulosic biofuels.’ The plant uses wood-based biomass from local timbering operations but in the future may widen its feedstock pool to include miscanthus and switchgrass, said the company. By mid-2011 the company plans to expand capacity to 60 million gallons/year (227 million litres/year) of cellulosic ethanol. The production site has permitting approval to produce up to100 million gallons/year of ethanol and methanol. 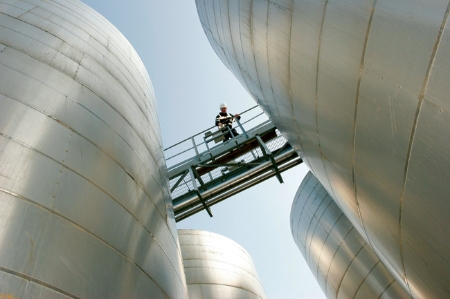 Biofuel production began at the site in March 2005 and accordingly became the first large-scale biodiesel producer in the UK.

In 2009 the company was bought by a Scottish consortium comprising, among others, Souter Investments, the private investment company of the Souter family – founders of the Stagecoach empire. The business was bought for an undisclosed sum from a group of investors led by Cinven Ltd who had backed the project since its early days in 2001.

Established in the 1970s, Iogen Corporation has become one of Canada’s leading biotechnology firms and is also a manufacturer and marketer of enzyme products.

A privately held company, based in Ottawa, Ontario, Canada, major investors in the company include petroleum major the Royal Dutch/Shell Group, Petro-Canada and Goldman Sachs.

In June 2010 Shell and Iogen announced a further investment in their jointly owned subsidiary, for the purpose of accelerating the commercial deployment of Iogen Energy’s process for making cellulosic ethanol from agricultural residues.

Iogen Energy is currently operating its Ottawa demonstration plant on a continuous basis using its R7 technology. Shell’s additional funding will be used to develop and demonstrate Iogen Energy’s next two major technology releases, R8 and R9, which will significantly reduce the capital and operating costs per gallon of cellulosic ethanol, the company says.

The company followed this, in September 2010, with news that it has initiated a process ‘to explore strategic alternatives for enhancing shareholder value and funding the deployment of its world leading renewable energy technology.’

The company has retained Goldman, Sachs & Co. as its exclusive financial advisor.

POET Research Center, located in Scotland, South Dakota, was the first commercial-scale ethanol plant in the state, the group claims. POET purchased the plant in 1987 and it began operating again in 1988.

In the past decade it has invested more than $40 million into cellulosic research and plans to continue doing so. Construction work at the company’s first commercial cellulosic ethanol plant in Iowa is scheduled be take about 15 months to complete once begun. The site is slated to produce 25 million gallons/year (94.6 million litres/year) of cellulosic ethanol and 100 million gallons/year (378.5 million litres/year) of corn-based ethanol.