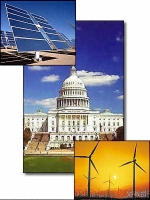 Washington D.C. [RenewableEnergyAccess.com] After nearly a year of legislative bantering and competing lobbyist input, the U.S. Congress passed the FSC-ETI, or JOBS bill, worth an estimated US$140 billion to U.S. businesses. It includes a number of measures that will boost some forms of renewable energy while doing little for others. The bill now heads to the President’s desk to be signed into law.

While the JOBS bill solves some important issues, like a trade dispute with the European Union (EU) and the closing of corporate tax loopholes, the bill’s critics argue it is loaded down with tax breaks and giveaways for business and industry special interests throughout the U.S. The reality is that renewable energy is just another, and some would say particularly deserving, special interest. Ethanol, wind power and geothermal industries made out well in this bill while other renewables, particularly solar energy, received little or nothing. The House passed the bill last Thursday by a vote of 280-141 and the Senate followed suit on Monday by a vote of 69 to 17. The JOBS bill primarily focuses on ending a trade dispute with the EU over export programs. The U.S. program was ruled illegal by the World Trade Organization. The EU has since placed large tariffs on imports of U.S. agricultural and manufactured products. The bill was considered a “must pass” piece of legislation, a broad range of business interests pressed Congress to have including the renewable energy industries. With a strong farming lobby, there was little doubt the ethanol industry would not make out well with the bill. Ethanol producers gained the Volumetric Ethanol Excise Tax Credit (VEETC), which extends the ethanol tax incentive to 2010 and eliminates any impact of the ethanol program on the Highway Trust Fund. Modifications were made to the Small Ethanol Producer Tax Credit that allow cooperatives to fully participate in the program. A new tax credit for biodiesel is also in the bill. An extended and renewed Production Tax Credit (PTC) are the focal point for all the other renewable energy technologies. The final bill offers a PTC of 1.8 cents per kWh for wind energy and geothermal energy, and 0.9 cents per hour for other resources such as solar, biomass, small irrigation power, and municipal solid waste. Companies would need to qualify or begin production by the end of 2005 and would then receive the tax credit for ten years for wind energy and five years for the other resources, including geothermal and solar energy. Catalyzing developments all across the country, the PTC has been extremely beneficial for wind power in the United States. However, Congress has allowed the measure to expire numerous times since its inception, leading to boom and bust periods for wind power development. This could happen again, because the current credit expires at the end of 2005. At the very least, it affords some time for wind power proponents to seek an extension beyond 2005. In the meantime, the wind power industry is elated to be able to return to construction of wind projects. “It’s a significant shift in the financial environment,” said the American Wind Energy Association’s (AWEA) deputy executive director Tom Gray. “This action by Congress and the expected signature of President Bush mean that about $3 billion in wind energy investments forecast over the next several years are now back on track across the country. ” In much the same way that wind energy flourished under the PTC, geothermal energy is likely to do well under the bill according to Karl Gawell, Executive Director of the Geothermal Energy Association (GEA). “This action by Congress will create thousands of new jobs and stimulate billions of dollars of investment in new geothermal power facilities over the next few years,” Gawell said. “It is expected to give the geothermal industry the same kind of dramatic growth stimulus experienced by the US wind industry. While wind and geothermal energy will do well under the JOBS bill, other renewable energy industries, particularly solar, did not fare so well. Scott Sklar, a industry analyst and consultant with the Stella Group, called the bill a boon to wind energy, geothermal, and refined coal – which Congress classified as a renewable energy for the first time. However, he said the tax incentives for free-flow hydropower and open and closed loop biomass are too small and of too short duration to be useful. Additionally, it appears that House language was kept in the bill that limits a solar project developer to a choice between the existing solar investment tax credit (ITC) or the PTC. In effect, this means that no solar project could or would use the lowered PTC at all. “A sad day for solar, biomass and free-flow microhydropower,” Sklar said. “The only renewable energy resource that received no actual incentive is solar energy, which is absolutely unconsciencable.” Colin Murchie, Director of Government Affairs for the Solar Energy Industries Association, said the only positive thing about the bill may be a willingness to go “back to the drawing board” on all of these energy bill provisions the next time around.