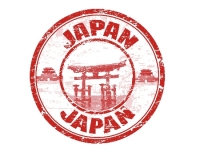 In what may be the most significant renewable energy policy development worldwide in years, Japanese authorities are circulating proposed feed-in tariffs that-if confirmed by the Minister of Trade later this month-could lead to a crash renewables program.

Equivalent to putting the country on a war-time footing following the Fukushima nuclear disaster, the unusually high tariffs will lead to a massive rush of renewable energy development.

Japan, a country long known for dragging its feet on developing its own renewable resources, may be embarking on a huge course correction in energy policy, turning its back on nuclear and turning toward renewables.

The outcome of the current policy debate is uncertain. Foreign analysts are left to read the tea leaves of Japanese political maneuvering to see what may be in the future for renewables in Japan.

Though major media outlets and trade publications have been reporting the proposed tariffs as fact, little is known in English.

From Japanese sources, it appears that the powerful Minister of Economy, Trade and Industry (METI) Yukio Edano will rule on the tariffs by the end of the month and open them to public comment.

The tariffs are scheduled to go into effect this July.

Most tariffs are further differentiated by size but with limited categories. For example, there are only two tranches for wind, solar PV, and geothermal. There are three tranches for hydro.

There is only one tariff for biogas.

Germany until recently used six different size tranches for solar PV. For wind, Germany uses a continuum of tariffs from a targeted moderate wind resource to the resource at a windy site.

The Japanese, rather than adopting best practice from Germany, Ontario or other countries instead have opted for a simplified tariff schedule. Doing so has limited program designers’ ability to refine the tariffs. Consequently, the resulting tariffs are among the highest in the world and for some technologies, such as for small wind, are the highest in the world. 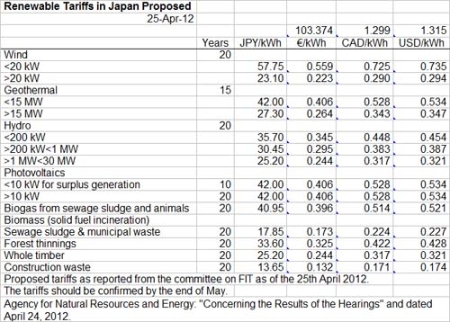 Though there are reports that the committee’s working documents justify the tariffs, these are not available in English.

Further, planning barriers in Japan are significant and may not only delay deployment but substantially increase development costs. Again, little is known about how this will play out once the program is underway.

Japan’s pricing committee has proposed some of the highest wind tariffs in the world. The wind tariff of 23.1 yen/kWh is more than 2.5 times the tariffs in major wind markets of Germany, Ontario, and France. Moreover, the tariffs are fixed at the same level for the entire 20 year term unlike those in Germany and France.

The proposed Japanese wind tariffs are even higher than Germany’s offshore tariffs, which critics have charged were a political gift to German utilities following the reversal of policy on nuclear power.

Japan has limited experience as a manufacturer of wind turbines. Mitsubishi is the only manufacturer with international stature in the wind industry.

There are 2,500 MW of wind generating capacity operating in Japan. In 2010 wind turbines in Japan generated 5 TWh or less than 1% of supply.

The proposed Japanese tariffs for small wind are the highest in the world. The tariffs for wind turbines less than 20 kW are 1.5 times those in Nova Scotia and more than three times that of the small wind tariff in Vermont.

Japan has little domestic manufacturing capability in small wind. At these prices, this will change overnight with all the attendant consequences of newly-developed products rushed to market. 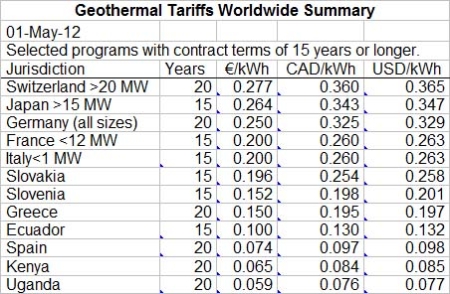 The proposed Japanese tariff is the highest in the world by far. The proposed tariff is 2.5 times more than that paid in Germany or France. 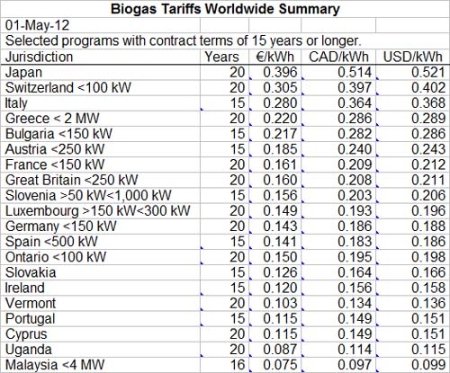 As in the US, Japan has been losing market share in installed solar PV capacity to Europe and China. Nevertheless, Japan remains one of the world’s largest markets for solar PV.

In 2011 Japan installed 1,300 MW of solar PV bringing total installed solar PV capacity to 5,000 MW. Solar PV generates about 4 to 5 TWh per year or less than 1 percent of the nation’s consumption.

Analysts expect a boom in solar PV in Japan with the proposed tariffs. While not the most lucrative in the world, they are among the highest and rival those in Ontario for small systems.

Because the Japanese solar PV tariffs are in effect undifferentiated by size, large projects will receive as much per kilowatt-hour as smaller projects. On this basis, the proposed Japanese tariffs will be the highest in the world.

Japan has a strong domestic solar PV industry and they are expected to take the lions share of the market, if not all.

The question now becomes how fast can the wind, solar, and geothermal industries get projects built and how fast will the government then ratchet down the tariffs for new projects.

Another question troubling analysts is how the tariffs were set. Are the tariffs, for example, simply too high? Did the power crisis-there’s now only one reactor of 50 operating and it is scheduled to shut down this month — force the Japanese pricing committee to make rash decisions? Were industry lobbyists given too much influence to push prices to lucrative levels?

Nevertheless, experience worldwide proves that tariffs need not be exorbitantly high to result in massive development. The growth of solar PV in Germany is evidence of that. Germans have been paying among the lowest prices in the world for solar PV and yet the industry continues to expand.

Markets respond quickly to modest premiums above expected costs and at Japan’s proposed prices, a boom — at least in project proposals — can be expected.

Feed-in tariffs are a proven mechanism for spurring the rapid development of massive amounts of renewable energy. They are Japan’s policy of choice for reconstructing the nation’s electricity system following the Fukushima disaster and Japanese loss of faith in nuclear power.

The next few years will determine if Japanese planners and politicians acted prudently or made injudicious decisions by their inability or unwillingness to take action sooner in a more deliberative fashion.

The lesson for other countries is clear: delaying the switch to renewable energy until confronting a crisis is more expensive than taking action when all is going well.